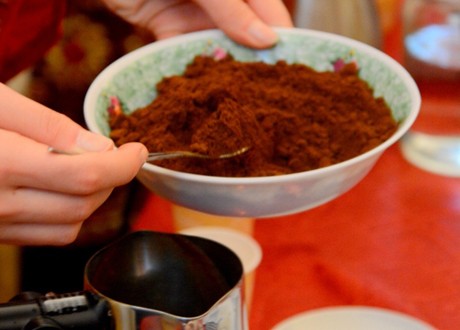 Balmy evening at the Museum

We can not say that coffee does not refer to a stunning and binding thing, without which it is impossible to live. While there are lovers and connoisseurs of coffee, they are many. Otherwise, there would not be a booming coffee business for four and a half centuries. According to an expert on the industry, at the opening of Turkish coffee culture, trade in this product is comparable with the sale of petroleum products. And that may well be!

But there is still diplomacy and politics. Meeting over a cup of coffee or tea is considered a good sign. At least in such cases there will not be hostility. Intelligent communication often takes place over a cup of coffee. There are such an important things that make their way to the front ranks of public life – tourism. People are gravitated to travel to see gorgeous sights, and the chance to explore lifestyles and technologies that can be applied at home. So underestimating the role of the drink in the history of the world is simply unacceptable.

At the opening of Turkish coffee, frankly, I went out of curiosity and courtesy. Why not respond to the invitation of the new Consul General of Turkey in Kazan, who his first official speech in the capital of Tatarstan pronounced in the Tatar language? On the second floor of the National Museum of Tatarstan really a sensational event occurred, unnoticed by most. Everything was quiet, except that the car with diplomatic plates at the entrance to the museum were giving the significance to what was happening.

By the way, at this moment, at the Kremlin, the exhibition center “Hermitage-Kazan” was opening with participation of top officials and high-ranking guests. On this day, a lecture by Mikhail Piotrowski was delivered, whom the President of Tatarstan Rustam Minikhanov had awarded the highest order of the republic. In general, there was a preparation for the meeting of the Permanent Council of the organization “TURKSOY” and, of course, to the final of the international song contest. Many had no time for coffee.

The National Museum gathered no more than 100 visitors on special invitations. Indeed, at first, an aromatic coffee with Turkish Delight was offered, after which one hardly is able to drink a liquid of the same name, offered in ordinary eatery. Even the flavor tones and inspiring!

Among the guests I met a banker by vocation and basketball patron Evgeny Bogachev, who also admitted that he is not a coffee nerd. He came here after the accomplishment of important basketball events to relax. And it worked! Evgeny Borisivich was drinking long by small sips a cup of drink proposed, which one would not drink in one shot, like a glass of water. And he seems, like me too, asked seconds. A beautiful girl with a deputy’s badge also was tasting the drink she appeared to be deputy of the Committee on education, science, culture and national issues Anastasia Isaeva.

All enjoyed the drink, taste is not easy to convey. But you can try, if you can find coffee, brewed according to the rules. The Turks do not conceal their secret. On the contrary, in every possible way explain its technology, promoting the tonic. As early as since the XVI century! So, they have attached Austria, Holland, France, and after the surrender of Paris and London, other European cities to the consumption of coffee.

Better than vodka and cigarettes

But somehow, this drink is considered the property of the Turks, a part of their ethnic identity. Namely, the Turks, not Columbia and 16 other coffee producing countries have driven the technology and scope of application of the beverage to the

cult level. How many legends, proverbs, historical and cultural events connected with the “Turkish” coffee! Because in the middle of the XVI century in the Ottoman Empire people were indulged in the drink imported from Ethiopia (on some versions, Syria). Coffee itself is considered a sign of Turkey. Turks get it from the Kingdom of Yemen, which was once part of the Ottoman Empire. Coffee has become part of the lifestyle of the Turks, and then – all over Europe and the world. “One cup of coffee is stored for 40 years!” – There are a lot of such sayings. How many historical paintings, prints, vintage elements of coffeehouses, where notable for the world event were taking place. Staff at the center of Turkish coffee – Mr. Orhan Hallik and Mr. Osman Serima – revealed the secrets of a unique virtuoso proper preparation of this fragrant drink. A shocking story of “kofeization i” of the world. Old paintings, architecture of coffee houses are witnesses to this. And how many prints, architectural and decorative works associated with coffee! The great composer Johann Sebastián Bach wrote “Coffee Cantata” with a comic story. And now, this music is listened, drinking at the same coffee. However, along with the coffee began to spread and smoking shisha, but this hobby only for a certain circle, thank God. In my opinion, coffee or tea relaxes better than vodka and cigarettes, isn’t it?

Purely cognitive side is impressive. Much of what was said in the opening part of the presentation of Turkish coffee, I just did not know. Even elementary thing I have not noticed: since 2013, the technology of preparation of Turkish coffee has been included the UNESCO List of Intangible Heritage.

General Director of the National Museum Gulchachak Nazipova was proud of opening the exhibition, even a tablet-mobile way, but unique, organized through the efforts of the Consul General of Turkey in Kazan Turhan Dilmach,. Deputy Minister of Culture and Tourism of the Republic of Turkey Abdurahman Aridzhi who had arrived in advance in Kazan for events arranged by TURKSOI to open the exhibition. Or maybe right those, who attach such importance to “everyday” things and products? The elements of way of life, history and culture speak about peoples and countries. It’s part of their sovereignty, economy, culture, tourism and attractiveness for investment. Somewhere skiing, scuba diving, and somewhere bear hunting attract serious and non-poor people. All carry from Africa some masks, drums, whistles.

Or maybe we are careless and lax? Happy that we managed to get the world to respect the ancient Bolgar, which with great difficulty has been included in the list of world heritage. Now

we break through Svijazhsk. In the meantime, go there, to carry guests, to hold tourists in the republic, Kazan, at least a week, we have not learned yet. And to promote our souvenirs. And we bring our money in foreign hotels, spending on foreign junk. With the ability to make strategic bombers and class helicopters, medical devices, trucks. With general recognition of the unique history and beauty of Kazan, the wealth of the country. Unable to hold only on oil, is not it? We think that chak-chak, och-pechmak, gubadiya – it’s too easy. Ask Muslima Latypova, who had spin the network “Bahetle” in the neighborhood, it is not easy to pull this “simplicity.” I am sure that Tatar chak-chak and triangle-echpochmak can outdo any McDonald’s. However, an advertising image of abroad tasteless sandwich is widespread, dynamic high-performance cooking of which fascinates and “sticks” us, the aborigines.

Many pin their hopes on the international “backing “, with the registry of the intangible world heritage by UNESCO. According to “Rossiyskaya Gazeta” (by the way, its editor – a graduate of the now combined with the philosophers of journalism faculty of KFU Vladislav Fronin – also Kazan brand) , the Convention on the Protection of Monuments of the Intangible Cultural Heritage in 2003 was signed by 158 countries.

Russia is not among them, which is a pity, because every people in our country could enter their customs, traditions and crafts in the register of UNESCO. Nevertheless, Russia is already

marked by two records – Yakut heroic epos “Olonkho”, as well as cultural space and oral tradition of the Old Believers of Transbaikalia – Semeiskie that even in Soviet times was able to maintain its long isolation from the outside world.

In November 2014, a special committee of UNESCO will select another batch of objects of intangible cultural heritage. The struggle between the contenders will be real hard. For example, Armenia has already submitted an application for inclusion lavash (more precisely, the cultural practices associated with it) in the international list , Brazil will achieve worldwide recognition for capoeira, and Estonia – National baths, which are heated in black.

Turkish coffee stimulates more vigorous search for ways to worldwide recognition of Tatarstan brands and traditional technologies. Complexity of promoting Sabantui in World Heritage List should not stop us. Perhaps it’s time to business and government officials, and the creative and scientific intelligentsia closer to ponder the local and national brands, which should have to keep up with Turkish coffee. And not be far behind, if you look closely.

National Sabantui, Armenian brandy, Bashkir honey, Kakheti wine from Georgia, Ukrainian lard, gorilka. I do not know, how about Russian vodka, moonshine Chuvash (I come from the Chuvash region of Bashkortostan), but they are also listed, bringing revenues to someone. These products could compete with the Tatar Buza, kazylyk. Spinning, promotion must be more dense. Starting from the public consciousness. It is believed that the French and Italians drink wine, the Germans – beer, Russians – vodka, and the Turks relax by aromatic coffee.

One can not be satiated by drink. Big Mac, rather not. And a real triangle is not always a triangle , many fakes. On the day of the tasting, I wanted to try, along with coffee Tatar gubadia, Turkish delight is sweet, does not fit all. Maybe Turks learn to cook it, all our cakes? And ask to promote it? They are able to conquer the world with delicious things. Or maybe we should learn ourselves to love our own appearance and lifestyle?