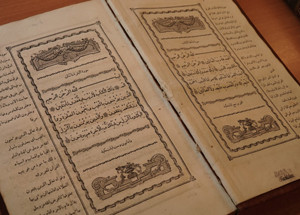 Russia’s first printed Koran of 1787 was presented in Kasimov

The VI All-Russian scientific and practical conference “Readings named after Mukhlisa Bubi” took place in the city of Kasimov. At its plenary session, a digital copy of the first printed Quran in Russia in Arabic, published in 1787 by decree of Empress Catherine II, was handed over by the Russian National Library to the Spiritual Administration of Muslims of the Russian Federation.

Advisor to the General Director of the National Library of Russia Anton Likhomanov conveyed the words of greeting on behalf of Vladimir Gronsky. “Congratulations to all participants of the event dedicated to the 1100th anniversary of the official adoption of Islam by the peoples of the Volga Bulgaria. This event, the significance of which can hardly be overestimated, contributed to the familiarization of Vozhskaya Bulgaria with the achievements of not only Muslim, but also domestic civilizations. It is no coincidence that the celebration of this event takes place throughout the country,” the director general of the National Library of Russia said in a statement. Anton Vladimirovich added that the National Library of Russia was founded in 1795 by decree of Catherine II. Today, the funds of the first state public library in Russia contain about 40 million documents, including 240 ancient handwritten and about 600 printed Korans, which are of great research value.

Anton Likhomanov handed over an electronic copy of the Koran of 1787 to Damir Mukhetdinov, First Deputy Chairman of the Spiritual Muslim Board of the Russian Federation. “This is a unique historical moment when the Russian Muslim community is given back its history. At one time, at public expense, by royal decree, but with the involvement of the Muslim clergy – sheikh, hafiz, hazrat Usman Ismail – they created a masterpiece, the first printed Koran, in St. Petersburg. This is one of the very first printed Qurans in general in the history of mankind,” emphasized Damir Mukhetdinov, Director of the Center for Islamic Studies at St. Petersburg State University, in his response. Only books published in Italy and Hamburg are considered to be earlier printed editions of the Holy Scriptures in Arabic. Thus, it is the St. Petersburg edition that is considered one of the first in the world, ahead of the printing houses of Muslim countries – the Ottoman Empire and Egypt. Damir Vaisovich added that the Arabic typographic font for the book was developed based on sketches by Usman Ismail. Later, this font will be transferred to Kazan, and already at the beginning of the 19th century, the widely known Kazan Koran will be printed by it.

Shushana Zhabko, head of the National Literature Department of the Russian National Library, said that the library’s collection includes a rich collection of publications in the languages ​​of the peoples of the USSR, Russia and neighboring countries. In particular, it contains an extensive fund of rare publications in the Tatar language, books about the history of Bulgaria and the Tatars. Part of this collection was exhibited at the Kasimov Readings. In addition, the National Library of Russia delivered to Kasimov the painting “Syuyumbike, Queen of the Khans” by Farid Yakupov.