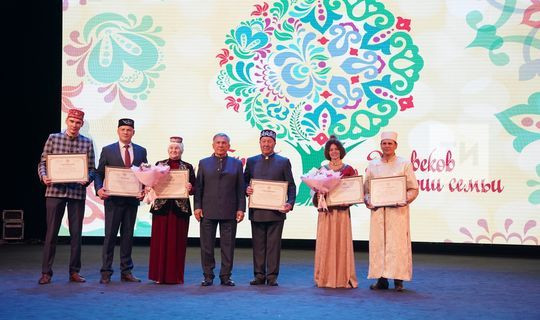 The Kamal Theater summed up the results of the republican genealogy competition “Without tarikhta ezlebez” (“Echo of centuries in the history of the family”). The President of Tatarstan Rustam Minnikhanov presented diplomas and valuable prizes to the winners. The State Councilor of the Republic of Tatarstan Mintimer Shaimiev also became a guest of the holiday.

“Each nation should  know its history. When we know our relatives, our ancestors, it means that we have a future. Thanks to those who organized this holiday. I hope that this work will be continued, ” President of the Republic of Tatarstan said.

The best were the works of the Minnibayev family from the Baltasinsky district (1st place), the Musalimovs from the Aktanyshsky district (2nd place) and the Mutagirovs from the Abdrakhmanovo village of the Almetyevsky district (3rd place). The winners were awarded cash prizes of 150 thousand, 130 thousand and 100 thousand rubles.

The solemn awarding of the winners was timed to coincide with World Family Day, declared by the UN in 1983.