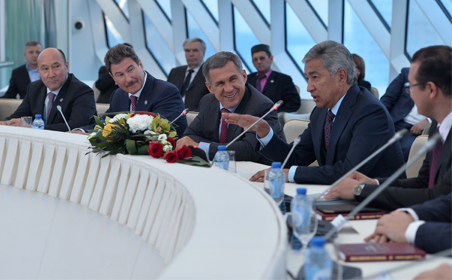 The meeting was held at the Palace of Peace and Reconciliation. It was also attended by Mayor of Astana I.Tasmagambetov, Ambassador Extraordinary and Plenipotentiary of the Russian Federation to the Republic of Kazakhstan Mikhail Bocharnikov, Deputy Prime Minister – Minister of Industry and Trade Ravil Zaripov, Deputy Prime Minister – Minister of Agriculture Marat Akhmetov, Kazan Mayor Ilsur Metshin and other officials.

At the beginning of the meeting. I.Tasmagambetov said that today Astana is hosting a forum of business circles of Kazakhstan and Tatarstan, as well as a meeting with the President of Tatarstan where they discussed issues related to the socio-political development, cooperation in the humanitarian sphere and beyond.

“Tomorrow, a great holiday Sabantui will be held in Astana, which with impatience is being expected by residents and guests of the capital of Kazakhstan”, – he said.

Rustam Minnikhanov thanked the leadership of Kazakhstan for their hospitality. “We are honored to hold the Days of Tatarstan in Kazakhstan, we have a special relationship, here is a home to many of our fellow Tatars, for which it is important not to lose contact with us. We want you to keep our culture, traditions and language of the Tatar people, “- he addressed to the gathered. RT President said that he proud of Tatars living in Kazakhstan because they have played a significant role in the formation and development of the country.

“We should be together – this is important, then we will be stronger, then we will keep our language, our traditions,” – said Rustam Minnikhanov. He also noted that Tatarstan and Kazakhstan enjoy “good, excellent relations and have an interest in promoting trade. economic, cultural trends, educational projects.”

Representatives of the Tatar community in turn thanked him for such a great holiday like the Days of Tatarstan in Kazakhstan. They noted that Kazakhstan is their native home where culture and traditions of the Tatars is treated with respect and attention . Here, books are published in the Tatar language, festivals and roundtables are held, educational programs are implemented. Residents of Kazakhstan also thanked the leadership of Tatarstan for Tatar artists regularly come to Kazakhstan, Sabantui are held.

Tatars of Kazakhstan emphasized that they are comfortable to live in their own country, at the same time they are proud of the success of Tatarstan where they come as to their home. Kazakhstan and Tatarstan, according to them, enjoy a kind of mutual understanding and spirituality centers, what is necessary to pass, to the younger generation. As proposal the idea of closer cooperation between young businessmen Tatarstan and Kazakhstan was put forward , as well as an active exchange between students.

Tatarstan President stressed the need to organize education of Kazakhstan students in higher education institutions of Tatarstan, and on the contrary that would be another unifying element for the two republics.

At the meeting it was stated that there is a street of Musa Jalil in Astana, but there is no a memorial plaque in his honor. Tatar activists appealed to the leadership of Kazakhstan and Tatarstan with a request for assistance in its opening. In addition, a question was raised about restoration in Astana of the ancient mosque, which was built in the XIX century by the Tatars with support of the Kazakhs.

Rustam Minnikhanov presented the Plenipotentiary Representative of the Republic of Tatarstan Rustam Timergalieva in Kazakhstan. “It is important that he should get your support, and become a link between us, presenting joint projects that you would like to realize,” – President of Tatasrtan said.

Imangali Tasmagambetov at the end of l meeting stressed that all the great achievements of Kazakhstan based on peace and harmony. “Our president is pursuing such a policy, and perhaps, over time, we understand that this is an opportunity for all those, who consider Kazakhstan as their mother home, develop, preserve their language, their culture,” – he said.

With regard to the restoration of historical mosque in Astana, the official said that the past in Kazakhstan is in a heartbeat. “Restoring the mosque – a great honor for us, and we accept your offer. As time passes, we would be to say that the monument has been restored, and is a jewel of our city, “- said the mayor of the capital of Kazakhstan.

At the end of the meeting, both sides exchanged gifts and made a joint photo on the memory.

We add that by assessment of the Executive Committee of the World Congress of Tatars, currently, in Kazakhstan live 350 thousand Tatars. The national association of the Tatars of Kazakhstan is an association of legal persons “Association of Tatars and Bashkirs of Kazakhstan.” The Association unites 42 national-cultural centers in all regions of the Republic of Kazakhstan, is represented on the Board of the WCT, the World Forum of Tatar Youth in the Country Council of Russian Compatriots in Kazakhstan. The association organizes scientific-practical conference on the conservation of Tatar culture, Republican Sabantui and other public events, coordinates the activities of national and cultural associations. Along with regional and provincial, in recent years, it held republican

Sabantui in Pavlodar (2008), Semey (2009), Astana (2010), Karaganda (2011), Aktobe (2012), Uralsk (2013). Three forums of Tatar youth, international scientific conferences in Semey and Uralsk were held. In Uralsk, center of G. Tukai was set up, which is a scientific and methodological headquarters for study and propaganda of the poet.