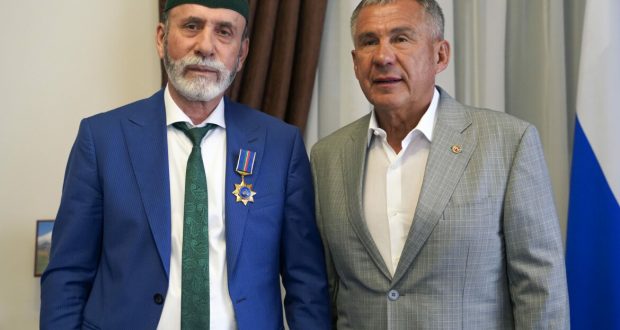 President of Tatarstan Rustam Minnikhanov, who is on a working visit to Crimea, met with the head of the Spiritual Board of Muslims of the Republic of Kazakhstan and Sevastopol, Emirali Ablaev. The head of the Republic of Tatarstan congratulated the interlocutor on his anniversary and presented him with the Duslyk order for his contribution to the preservation and development of spiritual and moral values, strengthening peace and interfaith harmony.

“In addition, Rustam Minnikhanov visited the construction site of the Cathedral Mosque in Simferopol, where he got acquainted with the construction of the main religious building,” the peninsula’s DUM said in a statement.

W remind  that this autumn a film dedicated to Emirali Ablaev, “Mufti. With a prayer on your lips.” The President of Tatarstan also took part in the filming of the documentary. Speaking about the head of the DUM of Crimea and Sevastopol, he stressed that Ablaev “works a lot not only on the scale of Crimea, but also on the scale of Russian Islam.”