Home / News / Rustam Minnikhanov: “Today it is not a shame to say that you are Tatar” 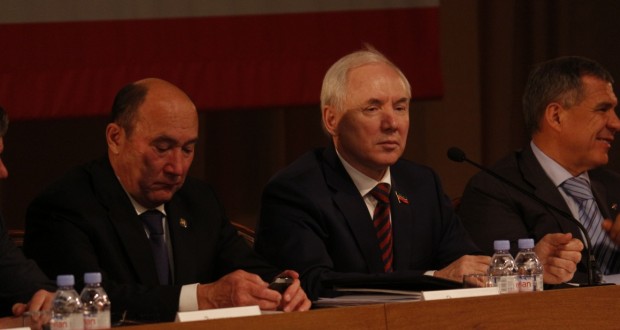 Rustam Minnikhanov: “Today it is not a shame to say that you are Tatar”

December 6, at the Kamal Tatar State Academic Theatre, a plenary session of the World Forum “Business partners of Tatarstan” took place. The event was held with the participation of the President of the Republic of Tatarstan Rustam Minnikhanov and heads of ministries and departments.

The Forum delegates have become Tatar businessmen from 54 regions of Russia, as well as from foreign countries. Before the start of the plenary session, they got acquainted with agricultural agribusiness of RT, presented in the theater lobby.

Opening the forum, the chairman of the Executive Committee of the World Congress of Tatars Rinat Zakirov said that from December 4 to 6 in Kazan, an extended meeting of the Executive Committee of the WCT “Summing up the results for 2014 and approval of the work plan for 2015” was held. December 4, last meeting of the Commission and on December 5th an enlarged meeting was held. On the same day, our delegates “Business partners of Tatarstan” worked in sections.

The first report at the forum was made by the Deputy Prime Minister – Minister of Industry and Trade Ravil Zaripov. He briefed the guests with the successes of the republic in the field of economy. According to him, there are 130 trade partners of Tatarstan. Inter-regional trade of the Republic in 2013 amounted to 509 billion rubles. Tatarstan today has signed an agreement on trade, economic, scientific-technical and cultural cooperation with 69 regions of Russia. An important role in the development of international and interregional cooperation in trade belongs to representations and trade houses of Tatarstan in Russia, the CIS and foreign countries. Currently, there are 23 missions, 15 of them foreign and 8 regional. This year, the permanent representations of RT have been opened in China and the Crimea.

Deputy Prime Minister – Minister of Agriculture and Food Marat Akhmetov reported in the development of agriculture in the republic . The report on investment attractiveness of Tatarstan was made by the Head of Tatarstan Investment Development Agency Talia Minullina.

Further speeches were made by representatives of the Congresses of Tatars from various regions of the republic and Tatar entrepreneurs. Representatives of the Tatar community living outside the country, thanked Tatarstan authorities for their support, and also informed which programs of preserving culture and traditions of the Tatar people have been implemented in their cities. Many noted that the forum “Business partners of Tatarstan” plays a unifying role for the

Tatar businessmen, and expressed the hope that it should be held in the future.

The speech by Saratov businessman Kamil Ablyazov, aroused great interest in the hall, and was one of the highlights on the forum. He proposed the creation of a nationwide program with duration of 50 years for members of the Tatar nationality, and with the help of the Academy of Sciences to identify the location of the Tatar monuments abroad. Several delegates also raised the issue of unification of religious leaders in the regions of Russia, to preserve the unity of the Tatars.

Summarizing the event, the President of Tatarstan Rustam Minnikhanov noted that such meetings are necessary, Tatar entrepreneurs must often meet each other, share contacts, share experience. “We are partners, nobody here over anyone is not the boss – he stressed. – The point that we have invited you here, and you come, says that there is demand at you and at us. Another thing is that not everything is a successes or there are excessive demands. Many of the issues we are able to decide together, I do not doubt it. “Head of the Republic noted that the World Congress of Tatars is the link for Tatars living outside Tatarstan. He marked the large number of interesting presentations, and drew attention to the fact that many people are worried about preserving the language and culture.

“In Tatarstan, these issues are easier, but outside there are questions, for example, are not allowed to build a mosque. We

try to help. This suggests that we need to be together and consistently solve problems “, – said R. Minnikhanov.

He also recalled that the Tatars in Russia for centuries lived in peace and harmony. “Today we are the second titular nation in Russia. Today it is not a shame to say that you are Tatar. I think that today Tatarstan and Tatar nation are at a high level. This is no accident. And Tatarstan, and you, the representatives of our nation in other countries and regions, are proving your worth, honesty, initiative. This suggests that our nation has a huge potential. I think if we still work more closely, then our work will be even more successful, “- said the President of Tatarstan. He urged the participants to gather more often and work together to address issues that are important for the Tatar people.

“Thank you for being with us. I hope you very much. You – our mainstay. Thank you for what you have come to Kazan, success! “- R. Minnikhanov summed. The meeting ended with the presentation of RT state awards.