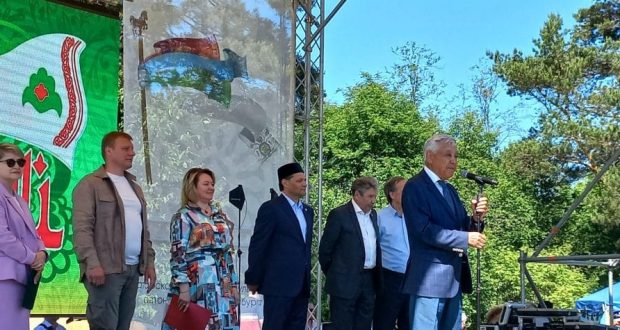 On June 25, Sabantuy took place in Enkolovo – a holiday that has been awaited for so long. After all, it was not held for two years due to the pandemic. This year there was a large influx of people, the weather was very hot.

Enkolovsky Sabantuy was visited by a guest from Tatarstan – Chairman of the State Council of the Republic of Tatarstan Farid Mukhametshin.
He said: “We are very pleased that we continue to preserve our traditions, customs, culture, language on these holidays and in everyday life.

Tatarstan is making every effort to ensure that the Sabantuy sites do not decrease.
This is a holiday for which, after the end of the sowing work, relatives and friends gather to communicate.

He also noted that representatives of all nationalities gather for Sabantuy, and they also gather for other national holidays.
“In unity, our strength, the strength of Russia,” Farid Khairullovich concluded.

The guests of the holiday were presented with the Tatar and Bashkir farmsteads, where they could see handicrafts, taste national cuisine, fragrant tea and koumiss, look into the Bashkir yurt and Tatar hut, take pictures with representatives of different nationalities dressed in colorful outfits, take part in folk dances .

The concert program included not only the performance of the St. Petersburg bands “Fayda”, “Akcharlak”, “Miras”, “ASAR”, “Irandek”, “Naza”, but there were also guests – artists from Tatarstan and Bashkortostan – Dilyara Mirovaeva, Gulis Abdullina, Azat and Alina Karimova, ensembles “Alabuga”, “Kamskiye Zori” and others.

The intense heat did not prevent the audience from watching performances in the open air or, not sitting still, dancing on the site in front of the stage.

The holiday that unites all our peoples is over. It impressed with its brightness, diversity, richness of national cultures. See you next time, Sabantuy!