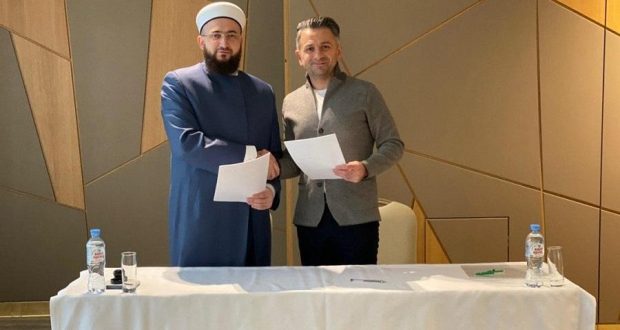 The Religious Board  of Muslims of Tatarstan  (DUM RT) and PayZakat LLC  have  signed a partnership agreement on the introduction of the PayZakat platform in mosques and shopping centers in Kazan. Special terminals – sadakomats – will be installed for convenience of Muslims who wish to fulfill the third pillar of Islam – to pay zakat, as well as make other charitable contributions. Operations on these terminals comply with Sharia standards. Thus, the PayZakat platform will replenish the existing set of technical capabilities in Tatarstan that allows Muslims to make non-cash donations to those in need and in favor of charity projects of the Zakat Foundation of the DUM RT. The document was signed by Mufti of Tatarstan Kamil Hazrat Samigullin and Director General of PayZakyat LLC Behnam Gurbanzade on November 25, 2019 in Moscow.

PayZakat – a single digital Internet platform for calculating, collecting, distributing and monitoring mandatory and voluntary donations in Islam – zakat and sadaka in favor of poor Muslims. The goal of the project is to increase transparency and accountability of the entire charity process, including as a result of the refusal to use cash. It is expected that the first sadakomats will appear at the Galiev mosque and the Golubaya (Zәңgәңr) mosque in Kazan.

In order to pay zakat or sadaki via the PayZakat platform, users must additionally pay a terminal maintenance fee during the operation. The operations are in accordance with Sharia.