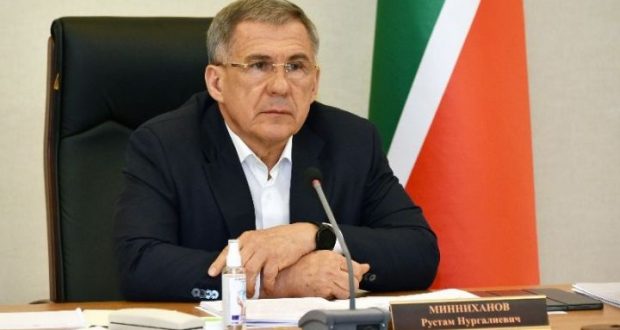 Sergei Sobyanin emphasized that the historic Decree of May 27, 1920 was a milestone in the national-state self-determination of the Tatar people, paving the way for the economic and cultural development of the republic. Over the past decades, the Tatar Autonomous Soviet Socialist Republic, along with the whole country, has come a long and difficult path, has made a huge contribution to the victories and achievements of the Fatherland.

“At  present stage, Tatarstan is rightfully one of the leading regions with powerful industrial, agricultural, scientific, and cultural potential. Large investment and infrastructure projects are being effectively implemented here, and the developed innovations are being introduced in many other regions, the Moscow Mayor noted. “You pay a special attention to the development of the social sphere, the creation of a quality public space in cities and towns, the preservation and enhancement of the unique cultural heritage.”

Sergei Sobyanin noted that in the current difficult period, Tatarstan is successfully combating the coronavirus pandemic: “The leadership of the republic is doing everything necessary to support people and the economy, and to return the region to normal life as soon as possible.”

Head of the Republic of Crimea, in turn, noted that today the Republic of Tatarstan is among the leaders in socio-economic development, being an example for many Russian regions. “This is the result of the selfless work of all Tatarstan people,” the telegram says.

Sergei Aksyonov emphasized that Tatarstan was one of the first regions of Russia with which the Russian Crimea concluded an agreement on trade, economic, scientific, technical, social and cultural cooperation. Within the framework of this agreement, interregional relations are successfully developing in various industries: industry, tourism, education, healthcare and many other areas.

“We are connected by a common history and a common destiny, we are united by love for our great Fatherland! Dear Rustam Nurgalievich! I thank you and all the inhabitants of Tatarstan for fraternal help and love for the Crimea. I wish you all good health, prosperity and new successes in your work for the good of Russia and your native republic! ” – added Sergey Aksyonov.