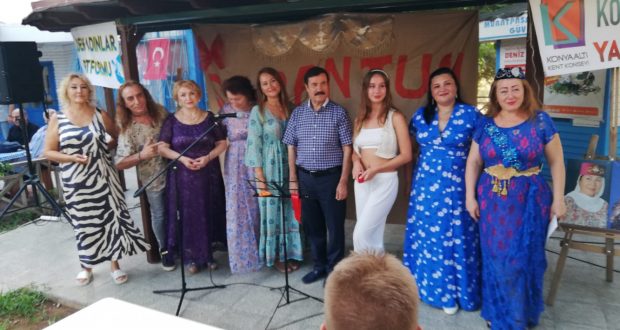 Tatar holiday Sabantuy was held in the city of Antalya

Zera Varelji, Chairman of the Council of Foreigners at the Mayor’s Office of the Konyaalti District of Antalya, Chairman of the Platform “Women Leaders”, shared her impressions of the Sabantuy holiday, which took place in Antalya. She is the initiator, the author of the idea of ​​holding a holiday and the embodiment.
On August 8 and 9, 2022, in the sunny city on the Mediterranean coast, in the city park, the national Tatar holiday Sabantuy was held.
The organization of the holiday was also attended by: the arts association “Ansan” of the mayor’s office of the Muratpasha district of Antalya, the organization “Türk Očagı”, as well as the diasporas of the Crimean and Kazan Tatars, with the participation of the diasporas of Uighurs, Turks and Uzbeks.
On the first day, August 8, a festive concert was held with the participation of artists from Turkey, Moscow, St. Petersburg, Kazan, Tashkent: Honored Worker of Culture of the Republic of Tatarstan Nailya Dusmetova, laureate of international competitions Zulfiya Khalilova, soloists of the Talyan Tatar Song Theater under the direction of the Honored Artist of Russia, Ildar Shigapova (Moscow), laureate of the All-Russian competition in Kazan Zera Varelji and Nailya Nasybullina, choral teacher Adeliya Dzhapparova, composer-performer Bainuri Kazandzhi (Turks, ancestors from Kazan), Gluza Belozerova, choral ensemble “ZerNay”, Gelnaz Zhikhangirova, Aykhan Dirol, Andriana, Asiya Zabirova-Shaihullina with the song “Antalya”. There were games, dancing, food.
On the second day, August 9, a concert-conversation “Meeting of Friends” was organized in the question-answer format. The audience was told about the Turkic people – the Tatars, the Republic of Tatarstan, located in the center of Russia, its culture and way of life, folk melodies performed on the Tatar kurai sounded …
Over the course of two days, the celebration was attended by several hundred guests. The holiday made a splash throughout Turkey! A report about him was broadcast on the central television of Turkey, articles and notes were published in numerous Turkish newspapers. The official representatives of the organizations present expressed their delight and desire to support and help in holding the Tatar Sabantuy on a larger scale, to make it an annual event.