Home / News / “We ourselves do not yet realize what we have done here”: the opera “Kara Pulat” was revived in Bolgar 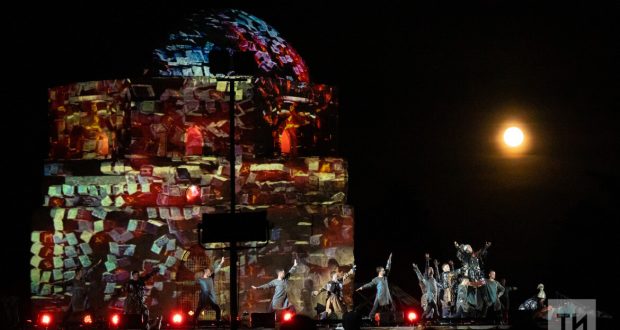 “We ourselves do not yet realize what we have done here”: the opera “Kara Pulat” was revived in Bolgar

On the territory of the Bulgarian Museum-Reserve there was a showing  of Elmir Nizamov’s opera “Kara Pulat” to the libretto by Renat Haris.

For the republic, this event is unique – previously, performances of this magnitude were not staged in the open-air format.

The idea to move the production, which was on the stage of the Tinchurinsky Theater in 2015, under the “open sky” belongs to the State Councilor of the Republic of Tatarstan Mintimer Shaimiev. He wanted the real Black Chamber, a unique monument of the Golden Horde architecture of the 14th century, to become a backdrop for the legendary opera.

Thanks to the support of the Renaissance Foundation, the Ministry of Culture of the Republic of Tatarstan and a team of more than 100 people, this idea was brought to life.

The first President of the Republic could not miss this event, and personally attended the first show.

In his welcoming speech, addressing the 1,500 people, he recalled what results the Tatarstan people had achieved on this land.

“It seems to me that we ourselves still do not fully realize what we have done here over the years. In a short period of time we have immortalized the Bulgarians. And this year we are celebrating the 1100th anniversary of the adoption of Islam – an epoch-making event. Quietly, without any contradictions. This is what the republic achieves by working with all its heart,” he said.

Mintimer Shaimiev is sure that no matter what the people of Tatarstan undertake, they can do everything. “Through UNESCO, we managed to prove to the whole world that Bolgar was created on this land,” he stressed.

The very same opera “Kara Pulat”, Shaimiev instructed to stage in new scenery for her on a regular basis.

For the organizers of the project, a space different from the stage box opened up new opportunities for the implementation of the most daring ideas. Thus, the effect of modern light visualization (3D-mapping) was applied on the walls of the Black Chamber. 25 videos were created for the performance.

“The complicated architecture adds its own complexity (the Chamber has a cubic base, turning into an octahedron, and ends with a dome on top — ed. note), but it was all the more interesting to play with the relief,” said Damir Allyamov, a member of the Abau studio, media artist.

Thanks to animated animation, the focus of the performance shifted from the actors to the Black Chamber itself, which was the main character. On its walls, the warriors of the warring side either “came to life”, then the flames of the battle flared up, and sometimes through the images of birds the rushing soul of the main character Nargiza was reflected.

“To be honest, I did not immediately agree, an incredibly responsible project. The theater took into account the peculiarities of the local scene and tried to make the performance more dynamic. You need to understand that this is not the work of one director, but of a huge team that worked very well together, ”he said.