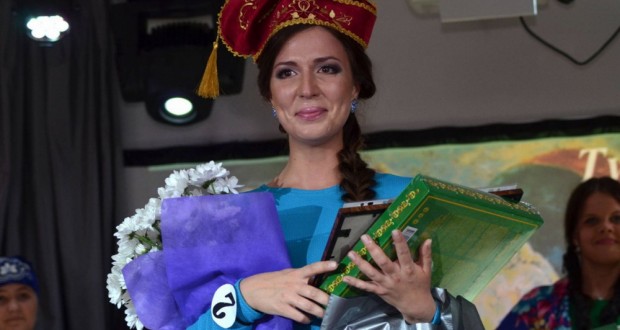 Welcoming remarks were spoken by the Deputy Minister of Internal Policy Tarasov S.M., Chairman of the Board RNKATNO Hafizov N.M., as well as a talented singer and official representative of the President of the First All-Russian Festival of Tatar beauty “Tatar kyzy 2014” Syumbel Bilalova.

For participation in the competition about 30 applications were presented, of which 10 beautiful and talented became participants of the qualifying competition. They impressed not only the jury, but the whole audience by their performances. The girls have passed 4 tests, which were judged on 5th points system. The first stage included a fashion show, where the contestants had to go nicely on the catwalk, wearing national costumes, and show off all of their beauty. The second stage consisted of presentation of the Tatar

national dishes, which were prepared in advance by the girls with their own hands, and intellectual competition, where each of the participants had to demonstrate their knowledge of the culture, traditions, history of the Tatar people. At this stage, all the girls were at a high level, showing all their skills, knowledge and culinary skills.

And finally, the third final stage – creative performances. Here, the girls showed all that they were capable of. Singing, dancing, acting, presentation of paintings, embroidered with their own hands, poetry. The jury was confused by such beauty, knowledge and talents of our girls. Each participant has proven that “Tatar Kyzy” – is not only a great hostess, but also smart, talented, modest girl.

Upon completion of all stages of the competition, the jury has been allocated time for the meeting to choose exactly the very “Tatar kyzy 2014.” During this time, lottery was organized for the audience, where one could win a free ticket to the concert of Rishat Tukhvatullin, which is to be held on October 25 at the House Culture of Railway workers. Also, our Nizhny Novgorod Tatars were pleased with the bright performance of distinguished guests from Moscow Syumbel Bilalova, as well as our fellow DJ Radik and Renata Ilyasova.

According to the results of the jury meeting, by unanimous decision, 1st place in the qualifying competition “Tatar kyzy 2014” took Lilia Garipova, 2nd place – Tenzilya Smelova, 3rd place – Venera Isayeva. One of the finalists will go to the finals of All-Russian Festival of Beauty “Tatar kyzy -2014” to Moscow. All contest participants received gifts, awards and good mood.