Home / News / Our guests from Germany by ours 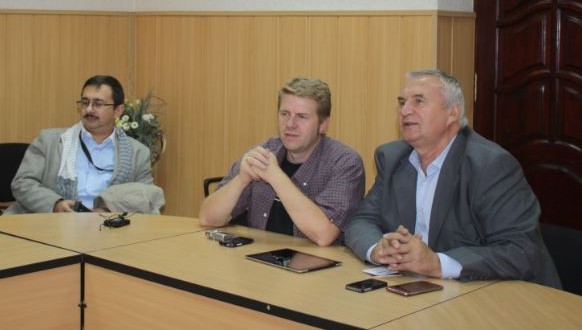 Our guests from Germany by ours

The Congress of Tatars has been visited by German scientist Miste Hotopp Rike, having found recordings of Tatar prisoners during World War II.

On a trip to Tatarstan and Kazan Mr. Rike – Chairman of the Board of intercultural society TAMGA and expert on Turkic peoples society on promotion to the people with a vanishing language and culture, as well as his companions and colleagues were accompanied by officer of the Institute of History, Academy of Sciences of Tatarstan Marat Gibatdinov.

Mr. Rike is known as a serious scientist expert as well as a great friend of the Tatar community in Germany. His research interests include study of history and the underground organization, which was created by Musa Jalil, Gainan Kurman and their associates. The real sensation for the Tatars became Rike’s latest find – four records of Tatar songs performed by the choir at the Legion “Idel-Ural”.

During the meeting, chief editor of “Donya” Rimzil VALEEV spoke about the activities of the Congress of Tatars and its

information-analytical department. Guests interested in where Tatars live, how implement their ethnic needs. All their questions have been given satisfactory answers. The conversation was in four languages: Tatar, Russian, German and English, Mr. Rike understands Tatar and his companions were translated in English Marat Gibatdinov. But he did not have to translate the words of the Tatar folk song “German koye” performed by Alfiya Minnullina, a German scientist himself translated the lyrics into German.

The guests visited the museum-apartment of Musa Jalil, met with scientist historian, who worked in the German archives Iskander Gilyazov. In the coming days, they plan to visit Naberezhnye Chelny and Yelabuga.