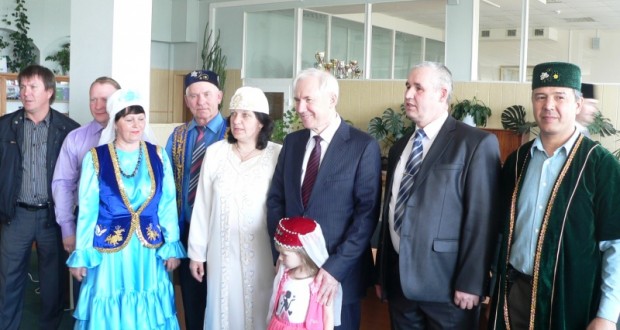 Sakhalin Island and the Tatars

Sakhalin regional Tatar educational and cultural center “Tugan Tel” (Mother tongue) holds a series of events “Sakhalin Island and the Tatars,” dedicated to the year of culture in Russia, with participation of TNV television channel ” and representatives of the Central Spiritual Administration of Muslims of Russia in the Far Eastern Federal District.

The books “The Island of Sakhalin and the Tatars” will be delivered to veterans of war and labor veterans, school, and local lore museum of Chekhov, archives, libraries. The event will also feature exhibitions of Tatar cuisine, Tatar literature: “The spiritual books of our ancestors”; “Awards of Tatars of Sakhalin Region”; “Excursion to the” Granny’s Chest “; about the activities of Tatar organizations in Sakhalin Oblast and SROO ” Tugan Tel “.

September 27, 2014, the event “Sakhalin Island and the Tatars” will be held in the school of the village Sovetskoe MO GO “Dolinsky.” The program also includes: conversation of Tatars with veterans elders; Tatar games that were left to us by ancestors Tatars “Eyda uynyyk.” Tatar songs will sound performed by children of the village Sovetskoe.

September 29, 2014, the event will be held in the Sakhalin Oblast Universal Scientific Library.

Fauzia Bayramova’s book “Sakhalin Island and the Tatars” was published in Kazan in July 20014. In 2012, Fauzia khanum nearly a month spent in Sakhalin, visited 8 cities, 2 villages where Tatars live, worked in the archives, collecting enormous amount of material about the history of the island of Sakhalin. The book in detail describes the ancient Turkic-Tatar period of Sakhalin Island, also the Japanese period and hard-labor imperial-Russian-Soviet period, and the island of today. The book provides a list of the Tatars, who were on Sakhalin at hard labor, at the end of the 19th century, the list of repressed Tatars of the last century.

The book contains many pictures of Sakhalin Tatars, including color ones. The book is in the Tatar language, there is a generalization, summary in Russian.