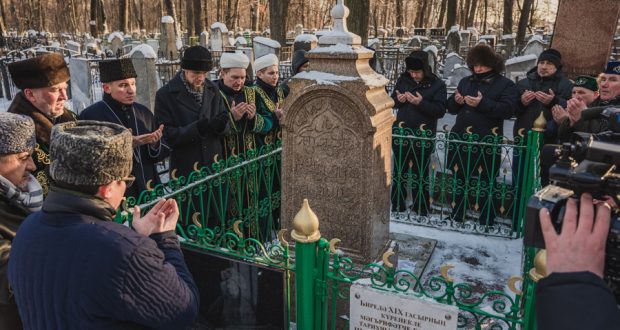 On January 16, the Tatar-Muslim community gathered to honor the memory of the great Tatar scholar and theologian, historian Shigabutdin Marjani on the occasion of the 250th anniversary of his birth. The meeting took place at the New Tatar Cemetery in Kazan. About fifty people gathered to make dua for the outstanding theologian.

The event began with the reading of the Qur’an. Then the imams offered a prayer for the repose of the soul of the scientist.

Imam-khatib of the Apanai Mosque Niyaz Hazrat Sabirov said that Marjani wrote more than thirty scientific works. Most of them are religious and philosophical works written in Arabic. Airat Khairutdinov, a researcher at the Marjani Institute of History, in turn, stressed that the scientist left a deep mark on the Islamic world.

The event was also attended by the descendant of Marjani – the great-grandson of his daughter Khava Azat Valiyev. He thanked the organizers of the meeting for their efforts in the field of preserving and studying the heritage of his great grandfather.