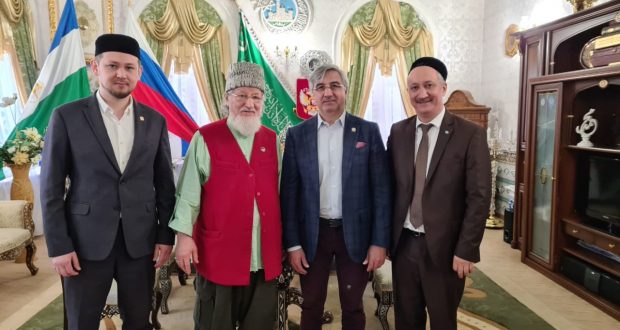 Before the start of the solemn event, the distinguished guests got acquainted with the exhibition located in the foyer of the Turkiston Palace of Culture. Dishes, national clothes, handicrafts, household items reflecting the traditions of the Tatar people were presented here. The exhibition was organized under the leadership of TOKPC and the efforts of compatriots living in Tashkent. V.G. Shaikhraziev highly appreciated the exposition.

R.D. Kurbanov, on behalf of the government of Uzbekistan, congratulated the TOKPC on its anniversary, read out a congratulatory message from the khokim of the city of Tashkent. The speech emphasized the significant contribution of the Tatar community to the development of new Uzbekistan, the strengthening of interethnic peace and harmony on Uzbek soil.

V.G.Shaikhraziev, in connection with the significant date, conveyed congratulations on behalf of the President of the Republic of Tatarstan R.N.Minnikhanov, the government of the Republic, the VKT and himself personally. “Tatars living in Uzbekistan carefully preserve the heritage of their ancestors and pass it on to future generations,” he said. He noted the great contribution of the Tatar Public Cultural and Educational Center to the preservation and development of Tatar culture.

O.S. Malginov for his contribution to the preservation and development of the language, culture and traditions of Russian compatriots, the strengthening of interethnic peace and harmony in the Republic of Uzbekistan, presented the activists of the TOKPC with thanks from the Ambassador Extraordinary and Plenipotentiary of the Russian Federation to the Republic of Uzbekistan.

After the solemn part of the event, a concert program was held, in which the song and dance ensemble of the State Philharmonic of Uzbekistan, amateur Tatar-Bashkir ensembles “Yashlek”, “Izge Nur”, “Duslyk”, the choreographic school “Pearl”, the folk ensemble “Edelweiss” from Almalyk. People’s Artist of Uzbekistan Zhenisbek Piyazov, Honored Artist of Uzbekistan Ruslan Gafarov, Honored Artists of the Republic of Tatarstan Ramziya Bikbulatova, Firuza Khaldarova, Marat Khakimov, Honored Workers of Culture of the Republic of Tatarstan Rimma Gizatullina, Maryam Bukharova, Raykhan Mannyapova and many others were pleased with their singing.

The heads of the other 8 Tatar cultural centers of Uzbekistan took part in all the events to celebrate the 30th anniversary of the TOKPC in Tashkent.

The solemn meeting and the festive concert were covered by the Television and Radio Company of Uzbekistan and the office of “Tatarstan – New Age” in Tashkent.