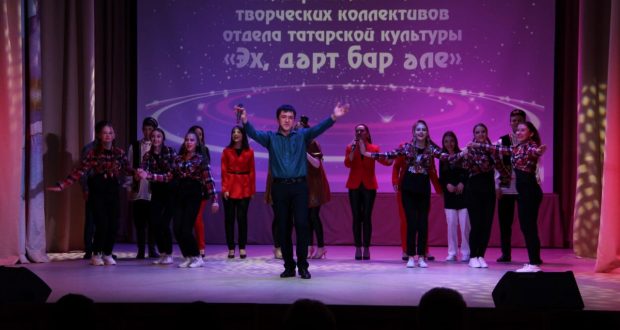 A concert was held at the House of Friendship of Peoples in Magnitogorsk – Tatar youth shone on the stage, which worthily continues the work of grandfathers and great-grandfathers who arrived in the Urals in the 1930s and managed to preserve the main wealth of the people – the Tatar language, customs and a piece of their native culture. Almost 100 years have passed since then, but the Tatar culture lives on, develops, and now it is in the safe hands of the younger generation.

In order for this holiday to take place, two of the brightest teams of the Tatar culture department united into one big family, came up with the concept of the concert and filled it with a wide variety of performances, armed with the motto: “Let’s now”.

The youth vocal ensemble “Yoldyz” (“Star”) was formed at the House of Friendship of Peoples in 2013, and since 2014, Liana Gabdrakhmanova, a graduate of the vocal pop-jazz department of the Magnitogorsk State Conservatory, winner of city, regional, regional and international competitions, has become its leader. Her vocal numbers are often included in various concerts of the House of Friendship, at city venues, and Liana’s gentle and deep voice conveys all the shades of Tatar melodies, skillfully singing the most complex melismas – vocal decorations characteristic of Tatar folk music.

Creative, talented, delicate Liana attracted young hearts and voices to her constellation, uniting them with her love for Tatar music. So, in the sky of Magnitogorsk, a whole constellation of youth and beauty lit up.

And Liana, a recognized needlewoman, for performances herself comes up with the style of concert costumes for her participants and sews them herself. So, on this day, the Yoldyz ensemble shone in new costumes, and Liana performed several songs in different styles, including an old Tatar folk song accompanied by a button accordion (accompanist Ilyas Gafarov), performances in duets and original numbers.

The club of Tatar youth “Idel” was founded in 2018 by the thoughtful, but with bright energy Aliya Zigangirova, who grew up on stage since childhood. The members of her club were girls and boys aged 14 to 30 – students of schools, secondary schools and universities, working youth. They actively participate in promotions, challenges, events: the “Chak-chak party” and “I speak Tatar” campaigns; they organize flash mobs, for example, “I read Tukay” and the intellectual game “Akyl show” (“Smart guys and smart girls”). And in recent years, they have discovered Tatar board games for themselves – they enthusiastically participate in the game “Tatar Mafia”.

In 2020, Aliya Zigangirova and the bright star of the Tatar Youth Club, Rimma Nigmatova, created the culinary section “Tatar Tasty Goodies” on VKontakte, came up with scripts for new videos, selected music, recipes for dishes – literally everything that is included in the work of both a confectioner and a production director. And this video format fell in love with Internet users, and on the screen the audience saw one of the videos and the process of creating another culinary masterpiece.

In addition, during the classes, the youth of the club learns Tatar folk dances, and the performances of this group always cause excitement in the hall and thunderous applause – the rapid pace, prowess and enthusiasm, the specificity of images and movements – these are the distinctive features of the creativity of our bright team.

After master classes in choreography in Kazan in 2020, Aliya Zigangirova staged the dance composition “Tatar Mix” from the dances of Astrakhan and Samara, Crimean, Perm and Kazan Tatars, which premiered on that day. The author and director of the composition “Waiting for Love” performed by Malika Safina, who studies at the College of Art and Culture (Uchaly, Bashkortostan) at the Department of Choreographic Creativity, is also Aliya Zigangirova.

In addition, the rest of the dances were greeted with a bang – the very first, provocative dance of the club – “Zyaka-zyaka”, the premiere of the dance “Yarmyak vaga” (“Yarma shot”), originating from the Samara region. A characteristic feature of this dance is a huge amount of fractions, “shotguns” (as the influence of Russian culture), a comic dance (“Shayan Biyu”) and a spectacular composition “Kalfak”.

Ensemble “Yoldyz” prepared a number of songs: the Tatar folk song “Safiya”, a polyphonic theatrical composition for Rim Khasanov’s song “Sandugachym – guzalem” (“Nightingale”), which he wrote especially for the singer Alsou, as well as the premiere of the new song “Yuri gene “(“Pretend”).

A special tone for the concert was set by the original and artistic singer Ilina Kanbekova, with a deep voice and soulful intonations. On this day, she was a little worried, as she was preparing to perform for the first time the premiere of the song “Etieme” (“Papa”), which she wrote herself and dedicated to two people dear to her heart: her father and beloved grandfather, the famous composer Rafail Mullanurovich Bakirov. Poetess Gulfira Shakirova translated Ilina’s poems from Russian