Home / News / The 5th Mascara Readings were held in Kukmor 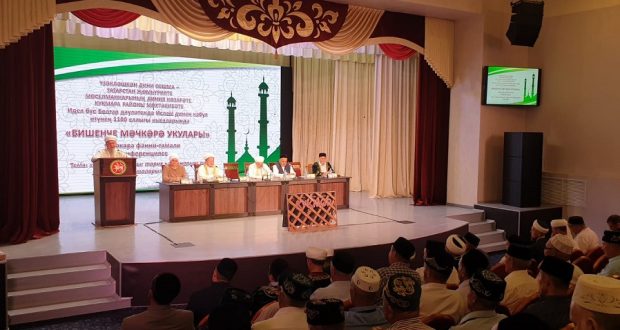 The 5th Mascara Readings were held in Kukmor

On August 17, the scientific-practical conference “V Maskarin Readings” was held in the Kukmorsky district. The scientific forum was organized within the framework of the 1100th anniversary of the adoption of Islam in the Volga Bulgaria by the Kukmor mukhtasibat of the Spiritual Muslim Board of the Republic of Tatarstan and the executive committee of the Kukmor region.

Religious, scientific, public, cultural figures, famous imams and ulema, local historians and historians, journalists and shakirds gathered to participate in the conference. So, among the guests of honor were the chief kazy of Tatarstan Jalil hazrat Fazlyev, the chairman of the council of aksakals of the DUM RT Airat hazrat Ayupov, the director of the Kazan Muslim Madrasah named after the 1000th anniversary of the adoption of Islam Ilyas hazrat Ziganshin, the first deputy director of the Muhammadiya madrasah Rustam hazrat Khairullin, the first deputy mufti of the Ulyanovsk region Rasul hazrat Fatkhullov, imam of the village of Novy Pineger of the Kirov region Ziyatdin hazrat Nazmetdinov, deputy director of the National Library of the Republic of Tatarstan Irek Khadiev and others.

Prior to the conference, the guests visited a number of local historical sites – the ancient Mascarinskoe cemetery, the historic Mascarinskaya mosque, as well as the museum of the Mascarinskaya boarding school. Then the participants of the Mascara readings took part in a significant event – the opening of the Hidayat educational center.

The plenary session of the Mascara Readings was held at the Kukmor House of Culture. This year the conference was held under the theme “Mascara village: history and issues of revival”. During the conference, the speakers made presentations on issues such as the preservation of the Tatar-Muslim identity, the study of Tatar genealogies, the history of the village and the Mascarinskaya mosque, the study of the gravestones of the ancient Maskarinsky cemetery, the history of the Muhammadiya madrasah, which celebrates 140 years from the date of formation, etc. At the end of the conference, a resolution was adopted. In particular, it notes the need to continue work on the restoration of the historic Mascarinskaya mosque, the preservation and study of the graves at the local ancient cemetery, the holding of the next Mascarinian readings as part of the 230th anniversary of the Mascara village, the creation of a documentary film about the history of the Mascarinskaya mosque and its madrasah, etc.

The conference ended with the presentation of letters of thanks to the DUM RT.