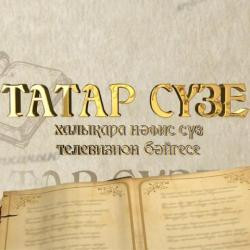 This year, the children’s TV channel Shayan TV of the TV and radio company Tatarstan – New Age will be holding the competition of the art word “Tatar Suze”. Applications are already being accepted for the competition, the organizers said at a press conference in Tatar-inform.

“We took over this competition from the Tatar State Philharmonic named after Gabdulla Tukay. It is a great honor and responsibility for us. To reach a wide audience, we announced it as a television competition,” said Ramilya Sakhabutdinova, executive director and editor-in-chief of Shayan TV.

She thanked the Commission for the Preservation and Development of the Tatar Language and the Languages ​​of Representatives of the Peoples Living in the Republic of Tatarstan for handing over the project to the TV channel.

“On our channel we cultivate personnel for television and masters of the artistic word. Therefore, the competition “Tatar Suze” was a gift for us. For those who work on Tatar television, the name of the contest has a very big meaning. We are Tatars, our word must be weighty. It must be passed on from generation to generation. And our Shayan TV is the only TV channel that educates this generation and works in the Tatar language,” Sakhabutdinova recalled.

In addition to expanding the audience, the television format will add new colors to the competition, the deputy of the State Council of the Republic of Tatarstan, People’s Artist of Tatarstan Ramil Tukhvatullin is sure. He suggested that the audience will be shown not only the gala concert of the competition, but also its “behind the scenes” – how the participants prepare for the test.

Video recordings of performances and questionnaires for participation in the competition are accepted by e-mail [email protected] Applications can be sent until October 31, 2022.

The previous two competitions “Tatar Suze” were held at the Tatar State Philharmonic. It is noteworthy that after each of them, the organizers were criticized – the participants complained about the change in conditions already during the competition, about the disrespectful attitude towards the contestants, and also about the lack of objectivity in evaluating their performances.

• The second stage of the Tatar Suzé competition will be held from November 1, 2022 to February 28, 2023.
• Works in the categories “prose” and “poetry” are accepted. The jury will evaluate the participants in three age categories. There are also categories for author’s performance, creative families and professional readers.
• The competition regulations can be found on the websites of TNV and Shayan TV.