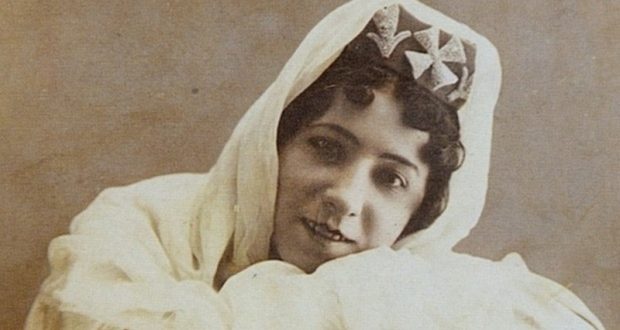 The next meeting of the discussion club named after Maryam Sultanova-Akchurina, organized jointly with the representative office of the World Congress of Tatars in Bashkortostan and the society of Tatar women of the Republic of Belarus “Sakhibzhamal”, was dedicated to the 130th anniversary of the birth of actress Sakhibzhamal Gizzatullina-Volzhskaya.

Last Sunday, May 15, it was 130 years since the birth of one of the founders of the Tatar national culture, who was at the forefront of the creation of the Ufa Tatar theater “Nur”, the first Turkic female actress Sahibjamal Gizzatullina-Volzhskaya. This event was dedicated to the next meeting of the discussion club named after Maryam Sultanova-Akchurina, organized jointly with the representative office of the World Congress of Tatars in Bashkortostan and the society of Tatar women of the Republic of Belarus “Sahibjamal”. The speaker this time was the head of the public relations department of the Ufa Tatar theater “Nur” Gulshat Safina. She gave a lecture on the topic “I did not play on stage, but probably lived,” dedicated to the life and creative path of Sakhibzhamal Gizzatullina-Volzhskaya.

“Having started working at the Ufa State Tatar Theater Nur, I, of course, heard that Sakhibzhamal Gizzatullina-Volzhskaya was the founder of a professional Tatar theater troupe in Ufa, but I didn’t particularly delve into her work, I wasn’t interested in her lifeline,” says Gulshat Safina. – However, in the course of preparing for excursions for the audience of the Nur Theater, schoolchildren and students, studying a lot of materials, each time I became more and more convinced of the scale of Tutash’s personality, as Sakhibzhamal Gizzatullina-Volzhskaya was called. The first actress of the Turkic peoples, who arrived in Ufa at a very young age and organized the theater troupe “Nur” Sahibzhamal Gizzatullina-Volzhskaya, talking about her to the audience, I call it the Tatar Jeanne d’Arc. In fact, that’s how I perceive it. It seems to me that we, contemporaries, have not yet fully appreciated her theatrical and directing talent, her ascetic life on stage. Indeed, so far neither in Ufa nor in Kazan there is a street named after her, neither a monument nor a bas-relief has been erected to perpetuate her memory. And the saddest thing is that not a single video recording, newsreel with her participation has been preserved.

A year ago, I decided for myself to understand what the Sahibjamal phenomenon is and thoroughly began to work on its solution. I was also prompted to do this by the fact that while in Kazan, I bought a book as a gift for my friends – Aigul Akhmetgalieva’s artistic and historical novel “Tutash”. I literally “swallowed” the book in two nights, and after that my interest in the personality of Sahibzhamal Gizzatullina-Volzhskaya increased even more. I began to study documents, met people who worked with Tutash, knew her closely. I visited her grave in the Kazan cemetery, where she is buried, as she bequeathed, next to the great poet Gabdulla Tukay, whom she happened to meet and who dedicated poems to her. It was from all this that my lecture was born in our discussion club, ”said Gulshat Safina.

At the meeting of the club named after Maryam Sultanova-Akchurina this time there were many young people – students and schoolchildren, admirers of the talent of Sahibzhamal Gizzatullina-Volzhskaya, artists of the Ufa State Nur Theater, scientists, journalists, ordinary citizens. Everyone was unanimous that it was necessary to somehow perpetuate the memory of the great actress, her name should not be forgotten.

On the occasion of the 130th anniversary of the birth of the outstanding Tatar actress Sakhibzhamal Gizzatullina-Volzhskaya, the Ufa State Tatar Theater “Nur” plans to release an ode performance based on the novel “Tutash” by Aigul Akhmetgalieva. The premiere is scheduled for December 2022. “She is the first Muslim woman to start acting in the theatre. A great man, a great personality,” says the chief director of the theatre, People’s Artist of Bashkortostan Azat Ziganshin about Sahibzhamal Gizzatullina-Volzhskaya.

Also, in order to perpetuate the memory of the great actress and reward the best theater artists and figures of theatrical art, the Ufa State Theater “Nur” established and is preparing to issue a medal named after Sakhibzhamal Gizzatullina-Volzhskaya “For a significant contribution to the field of theatrical art.”

Sahibzhamal Gizzatullina-Volzhskaya was born in Kazan in 1892. In 1912, she organized the Tatar troupe of the first theater “Nur” in Ufa, the successor of which is the modern Tatar theater “Nur”. This troupe broke up during the difficult years of the Civil War in Russia, and Sahibzhamal became the head of the 6th front-line troupe under the 2nd Army of the Eastern Front of the Red Army. After the end of the Civil War, Sahibzhamal worked in drama theaters in Izhevsk and Kazan. In 1923 she performed at the Bashkir Drama Theatre. Here she played the roles of Zuleikha in Karim Tinchurin’s play Yusuf and Zuleikha, Sarbi in Fathi Burnash’s play Young Hearts.