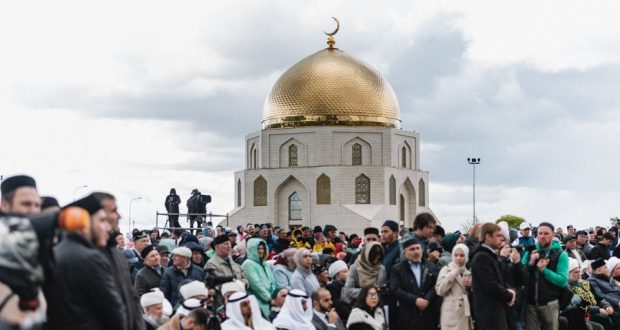 May 21 marked the 1100th anniversary of the adoption of Islam by the Volga Bulgaria. Preparations for the great anniversary of this historic event, which took place in 922, began a few years earlier with various events and the implementation of many initiatives, and today its long-awaited culminating celebration took place.

The ceremony began with a theatrical performance on the square in front of the Memorable Sign – a staged prologue personified the path of Islam to the Volga Bulgaria and the path along which Ahmed Ibn Fadlan walked. After the performances of the Tatar State Song and Dance Ensemble and the Kazan Dance Ensemble, distinguished guests entered the stage and congratulations were heard from their lips in the official part of the celebration.

Rustam Minnikhanov stressed that the 1100th anniversary is a significant event both for the Republic of Tatarstan and for Muslims in Russia and around the world. The President of Tatarstan thanked the Supreme Mufti of Russia, Talgat Tadzhutdin, for being one of the first to develop the idea of ​​annual Muslim congresses in the ancient land of Bolgar. Rustam Minnikhanov also thanked Mintimer Shaimiev and the Renaissance Foundation for their great work on the restoration of Islamic monuments.

“All these components allowed the Muslims of Tatarstan, Russia, our guests to see at what level 1100 years ago at the state level our ancestors converted to Islam. I want to thank each of you. It is a great joy for us that you are with us today,” Rustam Minnikhanov addressed the audience.

Then the guests were read greeting telegrams on the occasion of the 1100th anniversary of the adoption of Islam by the Volga Bulgaria on behalf of Russian President Vladimir Putin, Russian Prime Minister Mikhail Mishustin and Turkish President Recep Tayyip Erdogan.

Mintimer Shaimiev noted that in 2014 the Bulgarian historical and archaeological complex was included in the UNESCO World Heritage List. Experts around the world have recognized that Bolgar is a place of voluntary adoption of Islam in the northernmost territories. “This is our common success, a worthy result of our joint work. Thanks to everyone who took part in this. The revival of the ancient city of Bolgar showed the whole world that we are a nation that preserves its historical heritage,” the State Counselor emphasized.

Kamil hazrat thanked all the leaders, the assembled muftis. “Glory to Allah, in 1989 the Supreme Mufti Talgat Hazrat Tajuddin celebrated the 1100th anniversary of the adoption of Islam. After this event, a new page began in the history of the development of our religion in Russia. Christianity is officially accepted by Russia in 988. And Islam was officially adopted in 922, which means that the first heavenly religion in Russia is Islam. Therefore, this date is very important for all of us. May Allah be pleased with those who came to this holiday! – said the mufti and called on all those gathered at the site of the historic Cathedral Mosque to read the noon prayer. The participants of the celebration performed namaz after the Grand Mufti Talgat Hazrat Tadzhutdin.

The celebration of the 1100th anniversary continued with koresh wrestling competitions for the World Cup, a concert program.