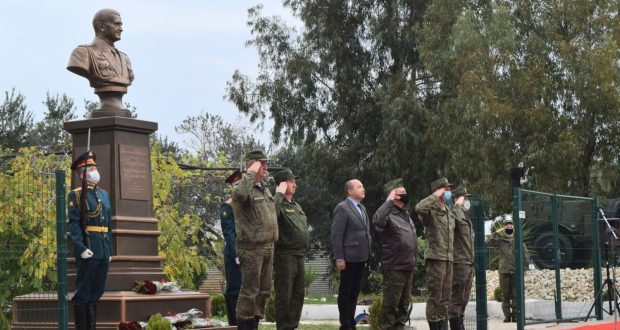 Among the Russian servicemen performing tasks in Syria, dozens of natives of Tatarstan, as well as Tatars from other Russian regions.

Lieutenant General Sergei Kuzovlev, Commander of the Russian Armed Forces Grouping of Forces in Syria, met with Damir Dinniulov and Rustem Amirkhanov. He told the guests about the situation in the Syrian Arab Republic, about the activities aimed at restoring important infrastructure.

The people of Tatarstan thanked  commander and  servicemen for the selfless fulfillment of their duty, courage in solving the assigned tasks. On behalf of the President of the Republic of Tatarstan, Sergei Yuryevich was presented with a command watch and a commemorative medal for the 100th anniversary of the formation of the Tatar ASSR.

Representatives of Tatarstan, together with those who are now protecting the sky over the Arab Republic, laid flowers at the monument to  Hero of Russia, Colonel Ryafagat Makhmutovich Khabibullin. He died on July 8, 2016 while carrying out a combat mission in the province of Homs near Palmyra, and led the crew of a helicopter shot down by militants.

The title of Hero of Russia, but also posthumously, was awarded to Marat Akhmetshin, a graduate of the Kazan branch of the Military Artillery University. In June 2016, in the area of ​​the city of Palmyra, during a battle with ISIS militants, he received numerous wounds from which he died in hospital.

The delegation of the republic handed over three capsules with earth, which they brought from Palmyra. Two capsules will be transferred to the museums of the Kazan school No. 113 and the school of the village of Atabaevo, Laishevsky district of the republic. Both of them are named after  Hero of Russia Marat Akhmetshin, who died in Syria in 2016. The third capsule will be kept at the DOSAAF Museum of Tatarstan.

Damir Dinniulov and Rustem Amirkhanov also met with the servicemen of the outpost, visited the Russian Navy base in the port city of Tartus, where they talked with the crew members of the Novorossiysk submarine and the Vyshny Volochek small rocket ship. Note that the rocket ship was built at the Zelenodolsk shipyard of Tatarstan.

The delegation handed over household appliances to the Khmeimim airbase – televisions, washing machines, heaters, presented to the servicemen, natives of the republic, memorable gifts, watches from the Chistopol watch factory and Tatar sweets for the New Year’s table.