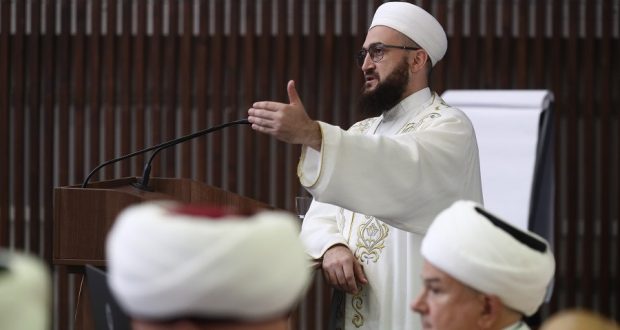 On June 26-28, important events in the life of the Tatar people and Muslims of Russia take place in the Kemerovo region. So, today Kemerovo State University opened a scientific-practical conference “The historical significance of the 1100th anniversary of the adoption of Islam by the Volga Bulgaria for Siberia.” Mufti of Tatarstan Kamil hazrat Samigullin and his adviser on international affairs Salih hazrat Ibragimov take part in the events as guests of honor. In addition, the honorary participants of the conference are the Chairman of the Religious  Assembly of Muslims of Russia, Mufti of Moscow, member of the Public Chamber of the Russian Federation Albir Khazrat Krganov, Mufti of Bashkortostan Ainur Khazrat Birgalin, Mufti of the Lugansk People’s Republic Muhammad Khazrat Gambarov, Mufti of the Irkutsk Region Farid Mingaleev and others. Topical issues of the development of Islam in the Siberian regions at the present stage” they made their presentations.

Welcoming the participants of the conference, Mufti of Tatarstan Kamil Hazrat Samigullin drew their attention to the history of development and the importance of Islam in the life of the Tatar people, spoke about the experience of the Religious  Administration of Muslims of the Republic of Tatarstan in various directions. In his speech, hazrat noted that the celebration of the 1100th anniversary of the adoption of Islam by the Volga Bulgaria is of particular importance, since “the event of 922 indicates that Islam is the first Abrahamic religion on the territory of modern Russia.” The mufti also spoke about the contribution of Russian Muslims to the development of world Islamic culture, including the first printed edition of the Qur’an, published by Muslims in Kazan in 1803, and stressed the need to revive the names and works of Muslim theologians in Russia, and in particular, to study the heritage of scientists that came out of the Siberian land.

The plenary session of the conference will be held tomorrow at the Government House of the Kemerovo Region. The moderator will be  Deputy Mufti of Tatarstan Rafik Hazrat Mukhametshin. Kamil hazrat is expected to speak on the topic “The significance of the celebration of the 1100th anniversary of the adoption of Islam in the Volga-Bulgarian state for the further development of Islam.” The conference is organized by the Religious  Assembly of Muslims of Russia, the Religious Administration of Muslims of the Kemerovo Region, the Administration of the Kemerovo Region – Kuzbass and Kemerovo State University with the support of the Foundation for the Support of Islamic Culture, Science and Education.

The working visit of the head of Muslims of Tatarstan to the Kemerovo region began yesterday with a visit to the national cultural program: the mufti became an honored guest at the International Mining Sabantuy in Novokuznetsk. Among the distinguished guests of Sabantuy were President of Tatarstan Rustam Minnikhanov, Chairman of the Spiritual Administration of Muslims of Russia, Mufti of Moscow, member of the Public Chamber of the Russian Federation Albir Khazrat Krganov, Mufti of the Religious  Muslim Board of the Kemerovo Region, Chairman of the “National-Cultural Autonomy of the Tatars of the Kemerovo Region” Takhir Khazrat Bikchantaev and others. Sabantuy was remembered for a rich program dedicated to the Year of the National Heritage of the Peoples of Russia and the 1100th anniversary of the adoption of Islam in the Volga-Bulgarian state.