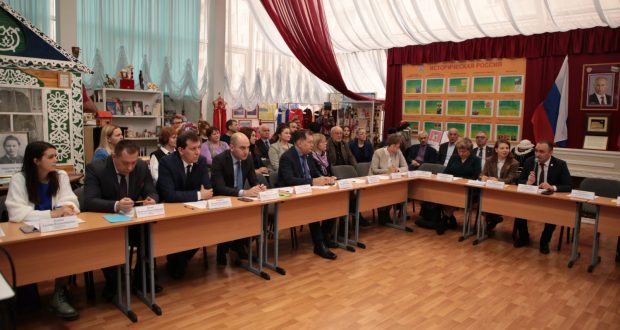 The problem of preserving native languages was discussed in Moscow

Autonomy of the Tatars of Moscow took part in “Preservation of the native languages” round table. The event was held at the school no.1186 named after Musa Jalil. It was attended by representatives of the Ministry of Education of the Russian Federation, the Russian Academy of Sciences, educational organizations.

Before the start of the round table, a tour of the school was conducted for the participants. The guests visited the Tatar language lesson, got acquainted with the work of various circles and sections. Deputy of the State Duma of the Russian Federation, Chairman of the Federal National-Cultural Autonomy of the Tatars Ildar Gilmutdinov sent his greeting to the audience. The round table was also attended by Chairman of the State Council of the Republic of Tatarstan Farid Mukhametshin, Deputy Prime Minister of the Republic of Tatarstan – Plenipotentiary Representative of the Republic of Tatarstan in the Russian Federation Ravil Akhmetshin, Colonel-General Rasim Akchurin, Chulpan Zalilova, the leadership of the Autonomy of the Tatars of Moscow, etc.