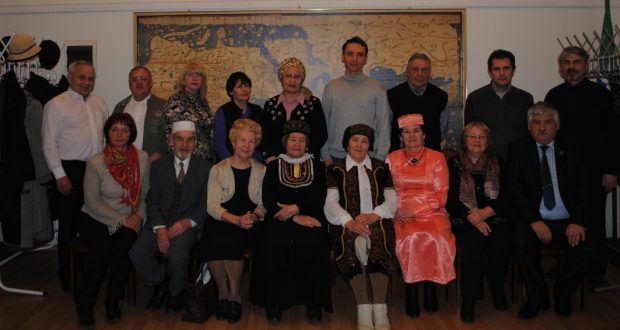 April 8, 2016 (Friday), in the conference hall of the Institute of History after Sh. Mardzhani, Tatartsan Academy of Sciences, a regular meeting of the Club of lovers of history and culture of the Tatars of Kazan at the Public Chamber of the Republic of Tatarstan was held. A report on trade and economic and cultural ties with the countries of the Volga Bulgaria Turkic-Muslim East was made by Head of Department of History of the Tatar-Bulgarian civilization RT AS A.A. Burkhanov. During the lecture, he described the experience of scientific expeditions along the way of Ahmad ibn Fadlan from Baghdad through Iran and Central Asia, Volga Bulgaria, in particular, to restore trade and caravan routes from Central Asia to Eastern Europe, so-called “Silver Road”. The report was accompanied by a presentation of a series of photographs telling about the relations between the peoples of the Arab East, Iran, Central Asia and Kazakhstan with the Tatars and other peoples of the Volga-Ural region in the Middle Ages and modern times.

At the end of the lecture A.A. Burkhanov showed the video “Expedition” Safir “- the path of Ahmed ibn Fadlan,” shot by Kazan film studio “Kadr”.

In a discussion on the report and the proposals for further work of history lovers spoke Associate Professor K(V) FU Cand. S.(History) A. Tukhvatullin, a local historian V.Demidov, research officer of Institute of History, AS RT, R.R. Aminov, a local historian G. Nurutdinova, Head of the Club F.S. Shamgunova and others.

The final report was the announcement by A.I. researcher, Academy of Sciences of the RT R.R. Aminov to the report for the next meeting on the subject on history of the Cossacks and Tatars- Cossacks.

The Club members expressed their gratitude to the Director of the Institute of History of the Republic of Tatarstan to academician Rafael Sibgatovich Khakimov and employees of the Institute for support in their endeavor, and for an excellent report.

The meeting ended with performing the Tatar folk songs.