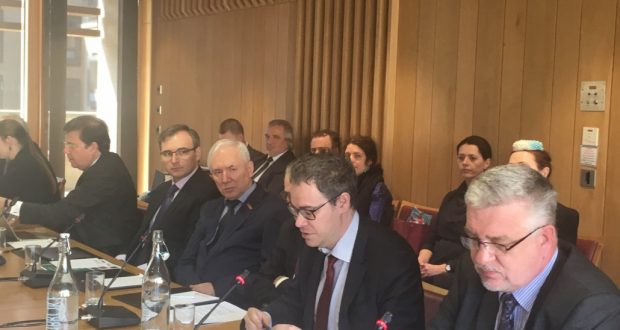 April 8, 2017, in Oxford, the conference “Tatars in World History” was held. The organizers of the conference appeared  the Institute of History  after  Sh. Marjani    RT Academy of sciences  together with partners from Oxford University. The initiative of the conference has been  approved by the Ministry of Foreign Affairs of the Russian Federation. The idea was also supported by the World Congress of Tatars, the Alliance of Tatars of Europe and the Association of Tatars of  the  Great Britain.

On behalf of the Embassy of the Russian Federation in the United Kingdom of Great Britain and Northern Ireland, guests and participants of the conference were welcomed by  adviser of the Embassy for Information, Press and Culture Konstantin Shlykov.

With a welcoming speech at the conference, the deputy mayor of Oxford, Ray Hamberstone, said: “Apart from the fragmentary facts about the Tatars, which I learned from my trips to Perm and Ufa, I know little about the history of this proud and original nation. Usually people come to Oxford for knowledge. It’s interesting that today I’m here to learn from you, “said R. Hamberstone.

Oxford University was represented by a British historian, an expert on early medieval Russia, the Caucasus and Byzantium, Professor Jonathan Shepard. Professor Shepard is recognized by the world academic community as a  leading authority on Byzantine studies and the history of Kiev Rus.

“I experienced mixed feelings of shock, awe and envy when I received an invitation to participate in this conference. Why? Shock and awe  because today there are scientists here, whose works occupy a place of honor in my personal library. Envy is explained by the fact that the researchers of the Golden Horde have a rich base of historical materials, while the source of the subject of my research does not provide a large quantity of artifacts, “Professor Shepard modestly noted.

In the continuation of his speech R. Khakimov emphasized the international level of published scientific works. The authors of seven volumes of the “History of the Tatars” are more than 200 best scientists from all over the world. And the monograph “The Golden Horde in World History” is the fruit of a joint work of the researchers from the Institute of History of the Academy of Sciences of the Republic of Tatarstan, the Institute of Russian History of the Russian Academy of Sciences and Oxford University. Now, these works are also available in English at the Bodleian Library of Oxford University.

We remind that  April 7, a ceremony of transferring the first copy of the seven-volume “History of the Tatars” and the monograph “The Golden Horde in World History” to the Bodleian Library first published in English   took place. Translation   of the book into English   and publishing  was carried out with a financial support of JSC “TAIF”.

Editor-in-Chief of the Golden Horde in World History, researcher at the University of Oxford and the Sorbonne-Paris IV University, Doctor of Historical Sciences. Marie Favero-Doumeneu thanked colleagues from the Institute of History of the Academy of Sciences of the RT and the Institute of Russian History of the Russian Academy of Sciences for fruitful scientific cooperation and stressed the importance of further research: “The Golden Horde is part of the common heritage of mankind. It    included  successor states of the Mongol Empire in China, Afghanistan, India, Persia and Anatolia, also Byzantium, Russia, Europe and the Middle East. The phenomenon of the Golden Horde had a much deeper influence on the formation of states and the course of world history than was previously thought in Western scientific circles, “concludes in her report  «Pax Mongolica:  a phenomenon of the continental level»  M. Favero-Doumeneuux.

The chief research officer of the Institute of Russian History of the Russian Academy of Sciences, the scientific editor of the monograph “The Golden Horde in World History”, Dr. Sc. Vadim Trepavlov in his speech agreed with his colleague from Oxford and stressed the importance of establishing contacts between Western and Russian scientists in the study of the phenomenon of the Golden Horde and the Tatar khanates.

Further with the report “Chancellery  practice in the Golden Horde and its successor states (Kazan and the early period of the Crimean Khanate)”   at the conference professor of the University  after Ettesh Loranda (Budapest, Hungary), Corresponding Member of the Hungarian Academy of Sciences Professor Istvan Vásáry  spoke.

Dariusz Kolodzeychik, professor at the History Institute of the University of Warsaw and the Institute of History of the Polish Academy of Sciences, spoke about the languages of the Chancellery of the Crimean Khanate. The conference concluded with Louise Bukharaeva’s report on the poetry of the Golden Horde, based on the materials of Ravil Bukharaev. Rinat Zakirov, Chairman of the WCT Executive Committee, and ATE members took part in the conference.