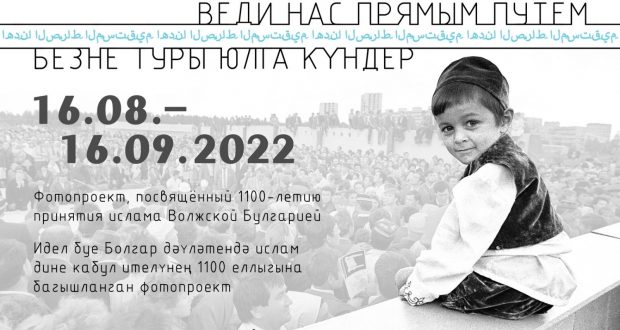 On August 16, the Marble Hall of the Russian Ethnographic Museum will open the photo exhibition “Lead us on the straight path”, dedicated to the 1100th anniversary of the adoption of Islam by the Volga Bulgaria. The project covers two periods of the modern history of Islam in Tatarstan: the documentary photographers focus on the epoch of the revival of spirituality in the times of the late USSR and the life of the Ummah today.

“Guide us to the straight path” – this is the sixth verse of the first sura that opens the Qur’an. For many centuries, the culture of the Tatars was inextricably linked with Islam. The Volga Bulgars adopted the Muslim religion as a state religion in 922. In the 20th century, with the coming to power of the Bolsheviks and the established course towards atheism, an attempt was made to break this connection: mosques were closed, spiritual literature and education were destroyed, religious figures were persecuted. As time has shown, these attempts were unsuccessful. In the era of the 80-90s of the XX century, with the advent of Perestroika and the weakening of pressure, there is a “turn” to religion. These tectonic social changes were captured by talented photographers Ramil Gali and Farit Gubaev.

The installation of a crescent moon on the Syuyumbike tower in the Kazan Kremlin, the first collective prayers, the opening of historical and construction of new mosques, the relationship of Muslims with other faiths – all this adds up to a kind of chronicle of the revival of spirituality in Tatarstan, a region known for its inter-confessional and inter-ethnic world. Today, several decades later, it becomes obvious that the events of those years became important milestones in the history of Islam in Tatarstan – a religion that reverently honors and carefully preserves traditions, but does not confine itself to the archaic, and its adherents look at the world with wide eyes.

The exhibition is accompanied by shots about the life of Muslims in modern Tatarstan, the development of Islam and the relationship between representatives of various confessions of the republic. The project was implemented within the framework of the Year of Cultural Heritage of the Peoples of Russia declared by President Vladimir Putin and the celebration of the 1100th anniversary of the adoption of Islam by the Volga Bulgaria. In 2022, we celebrate this significant date according to the generally accepted calendar – the Gregorian.

The opening of the exhibition will take place at 16.30. We invite everyone to take part.