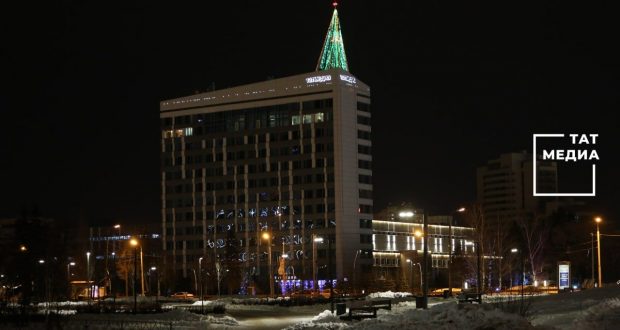 A New Year’s installation in the form of a luminous tree was  mounted  on one of the tallest buildings in Kazan: a festive structure adorned the roof of the Tatmedia skyscraper. In the evening, the lights from the tree are visible from several districts of the city at once, including from the Kremlin embankment, which attracts residents of Kazan and guests of the capital of Tatarstan on holidays.

According to Shamil Sadykov, General Director of Tatmedia JSC, the height of the tree is about 18 meters, the building itself is 56 meters. 390 meters of garlands were used to decorate the structure.

“We    have installed a New Year’s structure on the roof of our building to cheer up the residents of Kazan and tourists who will come to our city for the January holidays,” Sadykov said.