Home / News / The Urals hosted a cultural event “I love you, my Tatarstan!” 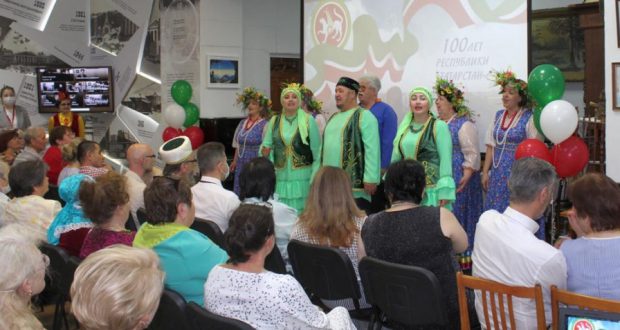 The Urals hosted a cultural event “I love you, my Tatarstan!”

The Urals hosted a cultural event “I love you, my Tatarstan!”

Within the framework of the cultural and educational project “Hearth” in the Bogdanovichi Museum of Local Lore, on the initiative of the Sverdlovsk Regional Organization for the Development of Friendship of Peoples “Tatars of the Urals”, the opening of the exhibition “I Love You, My Tatarstan!”

The interactive program “People’s Tatar Games” with the performance of the best creative teams of the city of Bogdanovich opened this great cultural event, bringing together 75 participants of all ages.

At the grand opening of the exhibition, unique household items, relics, books in the Tatar language, national costumes were presented. The guests and visitors of the museum were greeted by  head of Mr. Bogdanovich Martyanov Pavel Alexandrovich, stressing the importance of the event for the city district as a whole and for each resident personally. “Only through the knowledge of the culture and history of the people do we understand our community,” the head of the city noted.

The opening program of the exhibition was adorned with performances by the People’s Artistic Collective of the vocal ensemble “Lyubava”, the Tatar dance “Eh, Zhan Duskay” performed by Vorobyova Natalie; instrumental number of Khamidullin Ilnur Ilgizarovich – the head of the folk ensemble of Tatar and Bashkir culture “Kurai”.

The defile of models representing national Tatar jewelry became the final chord of the event. More than a hundred Bogdanovich residents and guests of the city took part in the opening of the exhibition.

A dynamic lively dialogue within the framework of the educational project “Ochag (Hearth)” of the Bogdanovichi Museum of Local Lore is actively developing, contributing to the dissemination of history, traditions, customs and achievements of the traditional culture of the peoples of the Middle Urals and Russia.