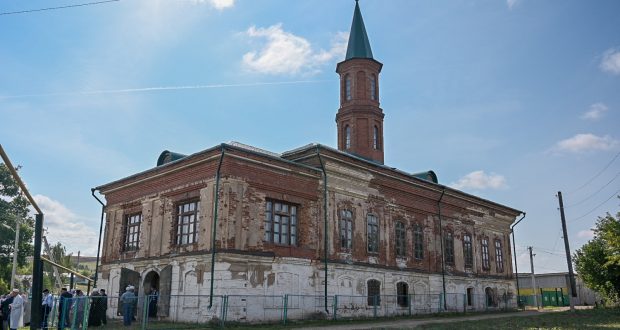 On the 19th day of the month of Muharram (August 17), the All-Russian scientific and practical conference “V Maskarin Readings” will be held in the Kukmor region. The scientific forum is organized within the framework of the 1100th anniversary of the adoption of Islam in the Volga Bulgaria by the Kukmor mukhtasibat.

Religious, scientific, public, cultural figures, famous imams and ulema, local historians and historians, journalists and shakirds will come to participate in the conference. In particular, the participation of the Supreme Mufti of Russia, Chairman of the Central Muslim Spiritual Directorate Talgat Hazrat Tadzhutdin, Deputy Mufti of Tatarstan for education, Doctor of Political Sciences, Professor, Rector of the Russian Research Institute and KIU Rafik Mukhametshin, Chief Kazy of Tatarstan Jalil Hazrat Fazlyev, First Deputy Director of the Madrasah “Muhammadiya” Rustam Hazrat Khairullin, director of the Kazan Muslim Madrasah named after the 1000th anniversary of the adoption of Islam Ilyas hazrat Ziganshin, first deputy mufti of the Ulyanovsk region Rasul hazrat Fatkhullov, chairman of the parish meeting of the Ufa mosque “Ikhlas” Muhammad hazrat Gallyamov, head of the representative office of the World Congress of Tatars in the Republic of Bashkortostan, imam-khatyba Alfred Hazrat Davletshin Mosque, Chairman of the Committee for the Protection of Cultural Heritage Sites of the Republic of Tatarstan Ivan Gushchin, scientists Hindu and Engel Tagirov, Foat Galimullin, Albert Burganov and others.

The annual Maskara Readings are held in the famous village of Maskara in the Kukmor region. Before the revolution, it earned the title of a Muslim educational center. The ancient village has been known since 1678. In 1791-1793, a stone mosque was built here at the expense of the merchant of the 1st guild Gabdulla Utyamyshev. It became one of the first stone mosques in Tatarstan, erected after the decree of Empress Catherine II, which allowed the construction of Muslim temples from stone. In 2022, restoration work will begin at the First Cathedral Mosque, which is an object of cultural heritage.

The ancient cemetery of the village of Maskara also attracts the attention of modern historians and local historians. It is the last refuge for many famous personalities. To date, 33 gravestones have been preserved here. Munir hazrat Yusupov, the imam of the village, the chairman of the Council of Aksakals of the Kukmor mukhtasibat, makes invaluable efforts to preserve the Mascarinskaya mosque and the local historical cemetery.

Thus, the holding of the annual Mascara readings is a significant contribution to the study of the Tatar spiritual heritage and allows you to gather scientists and imams from all over Russia in this historical place.

This year, the organizers are preparing a rich program for the participants of the V Mascarine Readings. From 09.00-11.00 hours, guests will make excursions to the ancient cemetery and the ancient Mascarinskaya mosque, to the museum of the Mascarinskaya boarding school. Then at 11.30 o’clock there will be a grand opening of the spiritual and educational center “Khidayat” at the mosque in the village of Taishevo. At 14.00, the conference participants will gather in the House of Culture of Kukmor, where a plenary session will be held and the main speakers will be heard.

The Kukmor mukhtasibat was preparing ahead of time for the anniversary Mascara readings: a collection of materials from previous readings was prepared and published in 2021, a sign was installed at the base of the Mascara mosque madrasah and fundraising was organized for restoration work in it.

Mass media are invited to cover the work of the Mascaraine Readings. Accreditation by phone: 8917 864 64 80 (Rimma Gatina).