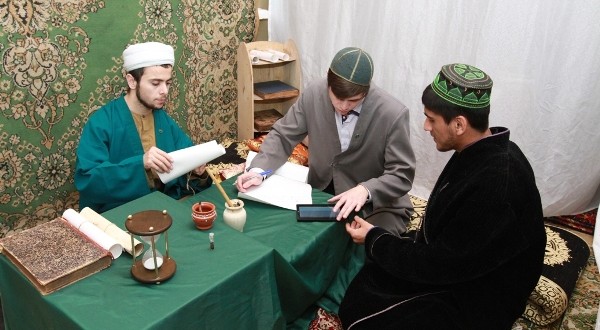 The VIII Student Festival is Held at the Russian Islamic University

November 13, 2014, the VIII Student Festival of Muslim culture and amateur movies is held at the Russian Islamic University.

The aim of the Festival – familiarity with the culture and customs of the Muslim peoples of the world.

The first part of the event encircles various exhibitions, showcasing national dress and national dishes by Muslim nations cooked by the RIU students takes place. Culture of each nation will be discussed in a separate audience, made in its proper national style.

Festival participants will acquaint with the culture of the Tatar, Turkish, Kazakh, Turkmen, Uzbek and Arab peoples – the first time this year the culture of Morocco, the peoples of the Caucasus to be displayed, as well as tasting their national dishes.

The second part of the festival includes the display of theatrical scenes presented by the participants of each team to be organized. Also, showing the pilot episode of the series, filmed by students of the University under the working title “Banal destiny” is scheduled. According to the results of the show the Best Script, Best Director, Best Cinematography, Best Actor, as well as a special prize of the Rector of Islamic University will be selected

Evaluation of the results of the competition will be done by a competent jury, which includes authoritative representatives of culture and science – the RIU Rector Rafik Mukhametshin, director of GU Tatarkino Vladimir Batrakov, executive director of Festival of Muslim Cinema Marat Davletov, Head. of the Department of Oriental Languages of Pyatigorsk State Linguistic University Ibrahim Ibragimov and others.

Honorary guests of the festival will be the participants of the International scientific-practical conference “Innovative technologies in the educational activities of Muslim schools” from Morocco, Egypt, Palestine, Turkey, Moscow, Yekaterinburg, Pyatigorsk, cities and regions of Tatarstan.