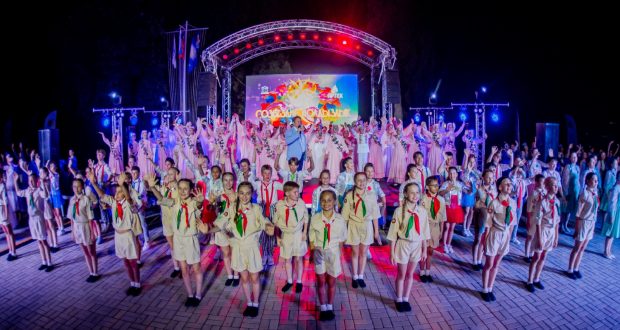 The winners of “Constellation-Yoldyzlyk” gave a big concert in “Artek”

More than a thousand children from Kazakhstan, South Ossetia, the Luhansk and Donetsk People’s Republics, as well as the Kherson and Zaporozhye regions of Ukraine became spectators of the concert of the participants of the festival of variety art of the Republic of Tatarstan “Constellation-Yoldyzlyk” at the International Children’s Center “Artek”.

The children of “Constellation-Yoldyzlyk” performed their best numbers for their peers, including songs in different languages ​​of the peoples of Tatarstan, popular vocal compositions, choreographic numbers with national flavor.

“Children from Tatarstan sing about friendship, peace and mutual understanding, and their songs teach goodness and creation. Now this is especially necessary. For the past 18 years, the Constellation-Yoldyzlyk movement has been giving the light of beauty and talent to all Artek residents,” said Dmitry Chip, head of the Lazurny camp at the Artek ICC, opening the concert.

On behalf of the Commission of the Russian Federation for UNESCO, the participants and organizers of the concert, as well as all Artek residents, were welcomed by the Executive Secretary of the Commission of the Russian Federation for UNESCO, Advisor to the Minister of Foreign Affairs of Russia Grigory Ordzhonikidze. According to him, for more than twenty years of history, the festival “Constellation-Yoldyzlyk” has established itself as a unique creative platform for children and youth. New talents are born here, and most importantly, traditions are preserved, respect and respect for the multifaceted cultural and spiritual heritage of the peoples of our country are brought up.

“It is gratifying that today the friendly multinational family of Artek residents will see this truly unifying holiday of creativity, where friendship, mutual understanding and boundless love for art reign,” emphasized Grigory Ordzhonikidze.

In turn, the head of the Crimea, Sergei Aksyonov, in his greeting noted the great importance of the events of the festival “Constellation-Yoldyzlyk”, held on the Crimean land, and thanked the organizers of the project.

“The festival contributes to the development of the creative potential of young people, the exchange of experience and the improvement of the professional skills of young talents, the strengthening of cooperation between the regions of Russia in the patriotic education of the younger generation, the preservation of the cultural and moral traditions of the peoples of our country,” Sergey Aksenov emphasized.

The festive evening ended with the presentation of gold medals “Artek” – “For achievements in creativity” to the organizers and teachers of the Tatarstan festival.