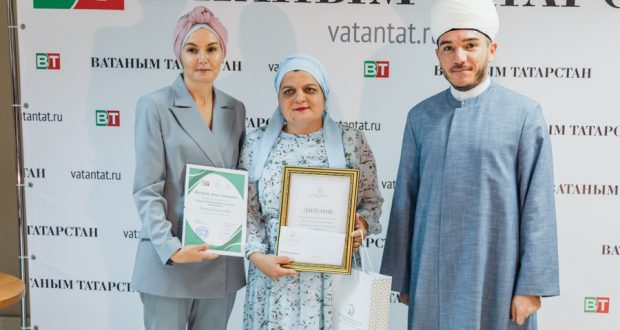 Today, on the 14th day of the month of Muharram (August 12), a solemn summing up of the results of the competition “Imam of our village” (“Bezneң avyl imams”) took place in Kazan. The competition was announced in March 2022 by the editors of the Vatanym Tatarstan newspaper together with the Spiritual Muslim Board of Tatarstan.

As part of the competition dedicated to the 1100th anniversary of the adoption of Islam by the Volga Bulgaria, the newspaper Vatanym Tatarstan published about forty publications about the conscientious work and merits of rural imams. Most of the authors of the articles are from the Buinsky, Mamadyshsky, Arsky, Pestrechinsky regions of Tatarstan.

Today the winners of the competition were awarded by the first deputy mufti of Tatarstan Ilfar hazrat Khasanov. He thanked the leadership of the Vatanym Tatarstan newspaper for organizing the competition and covering religious topics, the authors of the articles for their attention to the activities of rural imams, and wished the competition to continue. Hazrat also emphasized that religious activity requires great responsibility from imams. “Imam in Arabic means “standing in front”. In everything: in prayer, in life, in relationships with people… There are many hardworking, conscientious, educated imams in the villages of Tatarstan who do a lot of work on the path of our religion and for the benefit of the Tatar people,” hazrat summed up.

According to Gulnara Sabirova, editor-in-chief of the Vatanym Tatarstan newspaper, the editors set a goal to show talented imams, who would be followed by others. She stressed that the readers’ articles clearly showed how hazrats, thanks to their activities, are developing not only mosques and mahalla, but also their villages. In her speech, she thanked Mufti of Tatarstan Kamil Hazrat Samigullin, who supported the competition “Imam of our village”, and Alfiya Bakhtiyarova, a native of the village of Bakrchi, Zelenodolsk region, who now lives in Siberia. She dedicated the contest to her late parents and two brothers who died from the coronavirus.

All the winners of the competition were given a reprint edition of the Qur’an “Kazan Basma”, which was issued by the Muftiate of Tatarstan in honor of the 1100th anniversary of the adoption of Islam by the Volga Bulgaria. In addition, according to the results of the competition, a special prize was awarded to Alfinur Yusupova from the Buinsky district, the author of an article about the imam of the village of Starye Suyksu, Buinsky district, Linur Hazrat Sabirzyanov. She was awarded a prize of 10 thousand rubles.