Home / News / “We revive the heroes of Amirkhan Eniki”: shooting of the film “823 km” started in Kazan 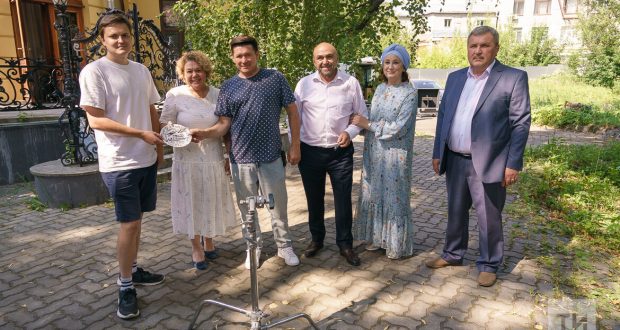 “We revive the heroes of Amirkhan Eniki”: shooting of the film “823 km” started in Kazan

“We revive the heroes of Amirkhan Eniki”: shooting of the film “823 km” started in Kazan

The Union of Writers of the Republic of Tatarstan became one of the filming sites for the film “823 km”. It was here that a plate was broken today, on which the entire film crew previously signed. This sound was the start of the filming process.

True, according to the old tradition, it is customary to break the dishes during the first shots, and the film crew has already spent several days in the village of Korsabash, Sabinsky district, where they shot a significant part of the film. Now the shooting will take place exclusively in Kazan.

“It could have been three wonderful short films for each of the short stories, but we wanted to combine them into one story,” said Milyausha Aytuganova, project producer, director of Tatarkino.

The task is not easy, because all these stories are not connected in any way. The filmmakers decided to apply for dramaturgy to a Moscow specialist – film critic, executive director of the GN Interpartners group of companies Valeria Baikeeva.

“In my opinion, the way the screenwriter combined these novels is the best you can imagine. An elegant solution. Here, these three stories are born through a look, reasoning, thoughts and reflection on the environment of the writer Amirkhan Eniki, who returned home. He kind of communicates with the viewer and becomes a cross-cutting image, a connecting link of three stories,” shared the People’s Artist of the Republic of Tatarstan Ildar Khairullin.

It is interesting that the main character here is transferred to modern realities, and the main events take place in the “settings” of the 21st century. “We seem to revive the heroes of Amirkhan Eniki, bring them closer to the viewer,” said Honored Artist of Tatarstan Irek Khafizov.

For Khafizov himself, the shooting of this film is a special event. After all, here he first acts as a director. According to him, it was scary to take on such a responsible project. Amir Galiaskarov came to his rescue – an experienced director, known to the people of Tatarstan for his works “Mulla”, “Father’s House”.

According to the directors, as is often the case in everyday life, they divided duties among themselves so that each was responsible for his own field of activity and did not interfere with the work of the other. On the shoulders of Galiaskarov fell all the work of exhibiting the “picture”, and on Khafizov – the responsibility for working with the actors, their orientation according to the works of Amirkhan Enika.

Speaking about the idea of ​​the film, Galiaskarov noted that history understands the well-known problem of fathers and children.

“There is a huge cultural and social gap between the main character and his son. The father is drawn to his small homeland, and he tries to convey to his son that one must not lose touch with one’s history, one’s language, and traditions. The son insists that all life today is in full swing in big cities and that there is no way without money and connections,” he said about the concept of the film.

He is sure that this story will capture the hearts of not only Tatarstan viewers, but will be understood in other countries as well. “This story is worldwide. And although we speak different languages, belong to different cultures, profess different religions, nevertheless, in all countries there is a problem of the disappearance of villages, the history of entire peoples,” he said.

People’s artists of the Republic of Tatarstan Alsu Gainullina, Ildus Akhmetzyanov also take part in the shooting of the film; honored artists of the Republic of Tatarstan Alfiya Khasanova, Gulchachak Khafizova and Fanis Ziganshin. The young generation of actors in the film will be represented by Zulfat Zakirov, Reseda Salyakhova, Ilsaf Gizzatullin, as well as students of the Theater School.

Completion of work on the film is scheduled for the end of this year.

The film is being shot under the state program of Tatarstan “Preservation of the national identity of the Tatar people (2020-2023)”.