Home / News / Colors of Sabantuy, landscapes of the republic and urban life: the exhibition “I’m alive” opened in “Khazine” 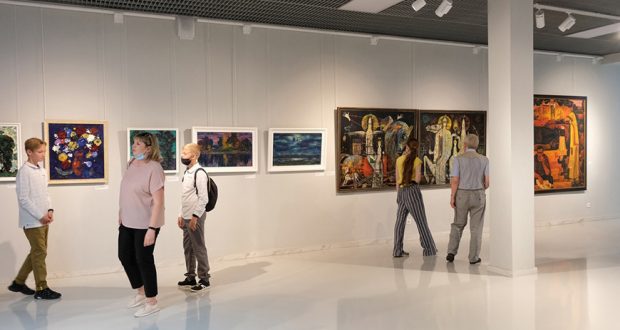 Colors of Sabantuy, landscapes of the republic and urban life: the exhibition “I’m alive” opened in “Khazine”

The exposition presents the works of the Honored Artist of Russia and People’s Artist of the Republic of Tatarstan Shamil Shaidullin.

The National Art Gallery “Khazine” of the State Museum of Fine Arts of the Republic of Tatarstan opened the exhibition “I’m Alive” in memory of the artist Shamil Shaidullin.

The exposition includes still lifes, canvases about the life and life of the urban and rural population, landscapes of the republic. The attention of the audience will also be attracted by paintings with colors of Sabantuy – it was Shamil Shaidullin who was one of the first to depict the national holiday of the plow in his many images and plots. In addition, the exhibition will show the artist’s interpretation of the history and culture of the Tatar people in a picturesque form, which sounded bright through the prism of Gabdulla Tukay’s work.

Approximately 2% of the artist’s creative heritage is represented in Khazine, who managed to create more than 3,300 paintings in the genres of landscape, portrait, still life, graphics, thematic works, as well as philosophical works on the theory of contemporary art.

It will be possible to see the paintings until September 4, the press service of the Pushkin Museum of the Republic of Tatarstan reports.

Shamil Shaidullin (1947–2021) is a Tatar and Russian artist, a prominent representative of the national art of Tatarstan. Born in the village of Berlek, Tetyushsky district, moved to Kazan at an early age. He studied at the Kazan Art College named after N.I. Feshin, and then at the Leningrad Institute of Painting, Sculpture and Architecture named after I.E. Repin. In 1980 he graduated from the creative painting workshop of the Russian Academy of Arts in Kazan. In 1987 he was awarded the title of “Honored Artist of the TASSR”, in 1997 – “People’s Artist of the Republic of Tatarstan”, in 2013 – “Honored Artist of Russia”. For more than 45 years of his creative biography, the artist has created many paintings. His creative principles embodied the main trends in the art of the 20th and early 21st centuries, the ideas of a new era and a new time.