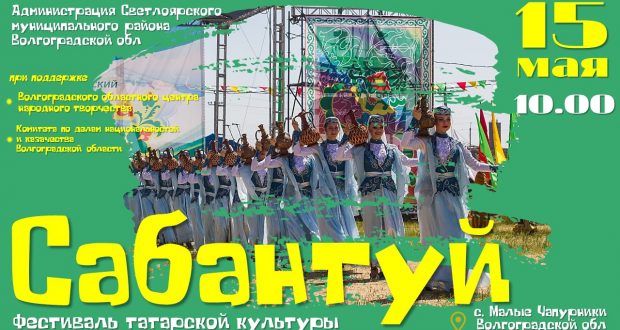 Sabantuy is a bright event in the cultural and spiritual life of the Tatar people, which includes a ritual part, honoring the leaders of labor, ancient traditional rituals, games and sports competitions.
The festival will unfold in the village of Malye Chapurniki, Svetloyarsky Municipal District, on May 15, 2022. Start – at 10.00.
The participants will be masters of arts and crafts, creative teams, individual performers of amateur art, representing musical, song and dance, verbal, ritual, game folklore, as well as modern forms of folk singing performance.
The festival will be held in several categories:
• vocals;
• choreography;
• Instrumental performance;
• theatrical art;
• arts and crafts.
A rich program awaits guests: sports and cultural events (belt wrestling Karesh, demonstration performances of martial arts federations), national fun, master classes of masters of arts and crafts, craftsmen, demonstration performances of the Volgograd equestrian club and much more.
Sabantuy is held as part of the implementation of the action plan for holding the Year of the Cultural Population of the Peoples of Russia in the Volgograd Region and is a vivid example of cultural communication and enrichment of the peoples of the Volgograd Region.
The organizers are the administration of the Svetloyarsky municipal district of the Volgograd region, the Volgograd regional center of folk art.