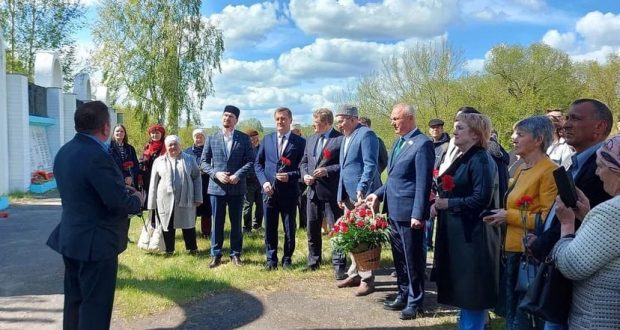 On May 13, the chairman of the NGO “Tatar national-cultural autonomy of the Penza region” Tuktarov Zh. Z., together with his deputy Alyushev R. Kh., a member of the autonomy, deputy minister of culture and tourism of the Penza region Mavlyudov I. N. took part in events in the village of Inderka Sosnovoborsky district.

The events were timed to coincide with the anniversary, the 100th anniversary of the birth of Zyabirov Khaidar Davydovich.

Representatives of the autonomy and other officials laid flowers at the memorial to the memory of fellow villagers who died in the Great Patriotic War. After that, the official part and a concert in honor of the worthy son of the Tatar people took place.

In his speech, the chairman of the Republican Public Organization “Tatar National-Cultural Autonomy of the Penza Region” Tuktarov Zh. Z. addressed the leadership of the district, deputies of the committee of local government with. Inderka, with a proposal to name the village BCD after Zyabirov Khaidar Davydovich.
The audience met the idea with applause and supported the idea.

Zyabirov Kh.D. from 1961 to 1999 was the chairman of the Iskra millionaire collective farm in the Sosnovoborsky district, which under his leadership became one of the best farms in Russia. During his leadership, Khaidar Davydovich made a significant contribution to the development of not only the village, but also the district and the region as a whole: soil fertility was significantly improved, many industrial, cultural and domestic facilities were built, roads, a gas pipeline, a hospital, a maternity hospital, a building for an operating schools with Inderka.

Khaidar Davydovich Honored Worker of Collective Farm Construction of the RSFSR (1991), participant in the Great Patriotic War. For labor and combat exploits, he was awarded two Orders of Lenin, the Order of the October Revolution, the Order of Friendship of Peoples, the Orders of the Patriotic War I and II degrees, and many medals.

“We and our future generations need to be equal to such purposeful, hardworking, responsible and faithful people as today’s hero of the day!
We are proud that Khaidar Davydovich Zyabirov wrote significant and rich pages in our national history! The memory of such personalities is important in the modern world, because by preserving the past, we create the future!” Zhigansha Zeynyatullovich noted in his speech.

ROO “Tatar national-cultural autonomy of the Penza region” is sincerely grateful to the leadership of the district, the village and the head of the society of Tatar culture of the Sosnovoborsky district Shagvaleeva G.S. for the opportunity to be part of such an important event for the entire region.