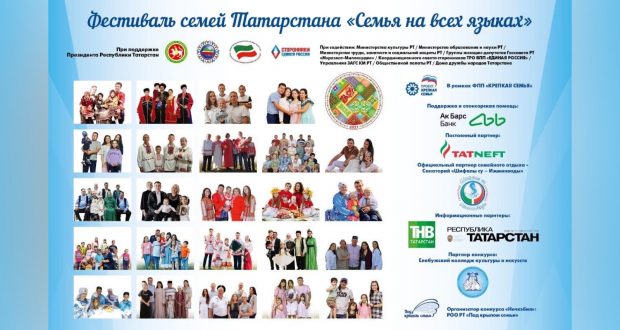 The beauty of motherhood and family: Tatarstan hosts the “Nechkәbil” competition

The first stage of the republican beauty contest of motherhood and family “Nechkubil” took place in Kazan. The event was dedicated to the theme “Family in all languages” and is the semi-final of the competition.

The “Nechkebil” contest  is a spiritual unity of people through a family, a connection between generations, mercy, love for a small and large homeland. Traditionally, families from all over Tatarstan take part in the competition.

This year, the festival is being held in a new format with live broadcasting of online-offline events through a streaming platform from the House of Friendship of the Peoples of Tatarstan.

Opening the event, the head of the Civil Registry Office of the Republic of Tatarstan Gulshat Nigmatullina presented the medal “For Love and Loyalty” to the Devyatayev spouses.

Also, within the framework of the event, the winners of the competition program were awarded – it took place in the process of preparing for the festival. The awards were presented by Izolda Zhuikova, a member of the Public Chamber of the Republic of Tatarstan.

The winners of the competition “Thank you, Mom!” were the Nikolaev family from Tetyushsky district and the Akhmedov family from Drozhzhanovsky.

The best in the essay competition “Life of a Wonderful Family” were the Antipovs from the Arsk region, the Belovs from the Nurlatsky region and the Mustafayevs from Kazan.

Also on the day of the festival, an Internet voting was held for the Audience Award from the official partner of the family recreation – the sanatorium “Shifaly su-Izhminvody” – the winners were the Khaziakhmetov family from the Aznakayevsky district. They won the weekend tour.

The results of the “Nechkәbil” competition will be determined based on the results of three festival days. The second and third days will take place on October 2 and 9, respectively, from 11 a.m. to 2 p.m. on the platform.