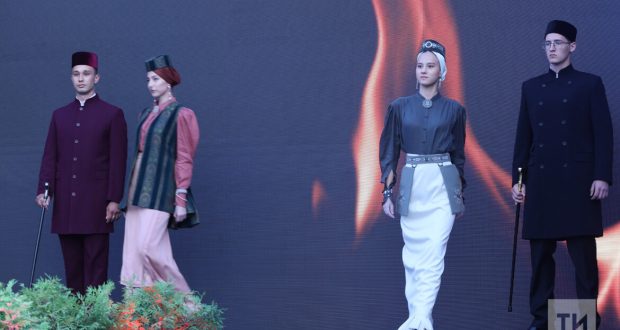 The business program of the II Ethno-fashion festival of folk art and arts and crafts “Lifestyle – Cultural Code” has ended in Kazan. As part of the fourth day of the festival in the Governmental Places of the Kazan Kremlin, a meeting was held with the historian of Tatar tea, the author of a series of publications on the cuisine of the peoples of the Kazan region Ruslan Bushkov, as well as a section where projects by modern Tatar designers and researchers of traditional Tatar costume were presented.

Ruslan Bushkov spoke about the history of how tea gained popularity among the Tatars, and also noted that tea is a drink that identifies Tatars among many peoples.

– For the first time, the ancestors of the Tatars, the Volga Bulgars, learned about tea. Kayum Nasyri believed that before the Tatars, the Volga Bulgars were already familiar with tea, however, as with medicine. He was brought here by the medieval missionary and traveler Ahmad Yasawi. If you come across evidence that the Chinese brought tea to the territory of the Volga Bulgaria or Kazan, this is not true, since until the 18th century the Chinese were forbidden to leave China and trade outside the country, they traded only in the border areas. Then tea began to spread along the Great Silk Road,” the historian noted.

Bushkov also emphasized that the Tatars also contributed to the wide distribution of tea in Russia, since the new caravan route to China through Siberia and Mongolia in the late 1680s was accompanied by the Tatars as a trading people and translators.

“It was then that the great tea route was formed. Until 1768, caravans went all the way to Moscow. Further, trade was entrusted to six companies of merchants, one of which was Kazan. There was a cult of tea in Kazan, all meetings and negotiations were held over a cup of tea,” Ruslan Bushkov noted in his speech.

The meeting ended with a master class on the correct brewing of tea from the organizer of the Tea Festival in Kazan and the joint drinking of this drink, popular among the Tatars.

Further, Candidate of Historical Sciences, member of the Public Council under the Ministry of Culture of the Republic of Tatarstan, Elena Gushchina spoke about modern culture and its transformation into modernity. During the meeting, the experts tried to find an answer to the question – how did it happen that the folk costume became out of fashion?

– With the development of industry, there was no need for crafts – the creation of fabrics and threads at home. There are standard fabrics. The processes of urbanization and industrial development have led to the fact that the traditional clothing, which has not changed for centuries, has gone. In the 20th century, there is a very rapid change in costume, the fashion for fabrics changed every 10 years. The closer the village was to the city, the faster the traditional way of life of the peasants, the traditional costume and crafts changed, she explained.

The historian noted that clothing is the language of culture that “speaks” and shows, and to which society is not indifferent.

“And even being in chests, the suit “speaks”, it broadcasts identity,” she summed up.

Researcher of the traditional Tatar costume, historian Dina Gatina-Shafikova spoke about the transformation of the Tatar traditional costume throughout the 19th century. Analyzing the situation with the modern Tatar costume industry today, the scientist noted that today the Tatars have a problem with scientific interpretation.

— We have a lot of young burning eyes who want and try to do something, but they have problems with the methodology and access to funds. I hope this problem will be solved, she stressed.

The solemn closing ceremony of the festival took place today. Summing up the four days of the forum, the Minister of Culture of Tatarstan, Irada Ayupova, noted that a tree does not grow without roots, calling for preserving national traditions in clothing.

“If we are the last generation to see these works of art, crystallized and perfected over millennia, then our generation will be worthless, then we will be a generation of destroyers. I urge you not to be shy to wear deeply rooted clothes, to be bearers of traditions. Let’s not be afraid to be bright, she appealed to the public.