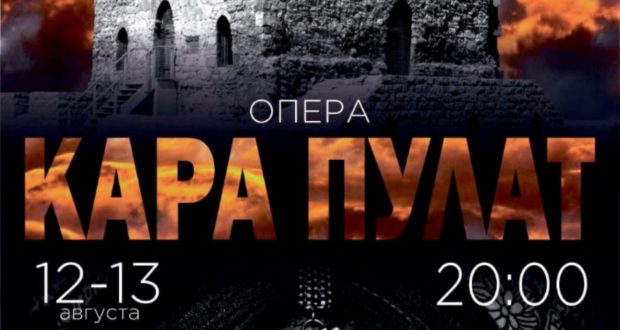 The premiere of the opera “Kara pulat” by composer Elmir Nizamov to the libretto by Renat Kharis took place on the stage of the Tinchurinsky Theater in 2015. After a seven-year pause, in May of this year the opera returned to the stage of the Tinchurinsky Theater again and was dedicated to the 1100th anniversary of the adoption of Islam by the Volga Bulgaria. The opera was staged with the support of the Vozrozhdeniye Foundation under the direction of the State Councilor of Tatarstan Mintimer Shaimiev.

On August 12-13, 2022, the next performances of the Kara Pulat opera will take place, but not in the usual scenery on the stage of the theater, but on the territory of the Bulgarian Open-Air Museum-Reserve.

Bolgar is included in the UNESCO World Heritage List. This place has an outstanding value for the whole world. And we need such projects to make people interested in studying history, – said Mintimer Shaimiev, State Counselor of Tatarstan, Chairman of the Board of Trustees of the Republican Renaissance Foundation.

Georgy Kovtun, Honored Artist of Russia, People’s Artist of Tatarstan, directed the premiere production of the opera Kara Pulat. The director of the open-air version of the opera is Ilgiz Zpyniev. In Bolgar, the orchestra is also expected to perform under the direction of the conductor of the Tinchurinsky Theater Orchestra Ilyas Kamal. On the building of the Black Chamber in Bulgar, the effect of modern light visualization, 3D-mapping, will be applied. At the same time, in preparation for the production of the opera, all the requirements for the preservation of historical and cultural heritage were met.

Performances of the opera “Kara pulat” are scheduled for 20.00. Free admission.

Recall that the plot of the opera is based on the Tatar legend about twelve girls who were burned by the soldiers of Tamerlane. During the capture of the Great Bulgar, the soldiers of the Samarkand Emir Tamerlane captured twelve beautiful girls, one of whom was the daughter of the Bulgar Khan. The warriors must deliver her to Tamerlane himself as a concubine, but they cannot find out which of them is the Khan’s daughter. They subject the girls to various trials, but the faithful friends of the khan’s daughter do not betray her and in every possible way enclose her, misleading Tamerlane’s soldiers. However, someone informs that the khan’s daughter does not burn in the fire. Nuker of the Samarkand emir orders to drive all the girls into a stone chamber, surround it with firewood and set it on fire. Fire surrounds the room.

The production designer of the opera is Vladimir Samokhin, the costume designer is Asel Ismagilova, the choreographer is Honored Art Worker of Tatarstan Fanis Ismagilov, the choirmaster is Dina Venediktova, the accompanist is Aigul Zainullina.