Home / News / “Vagapov turned out to be middle-aged, the image was a success”: a monument to the father of the Tatar stage will be opened in Kazan 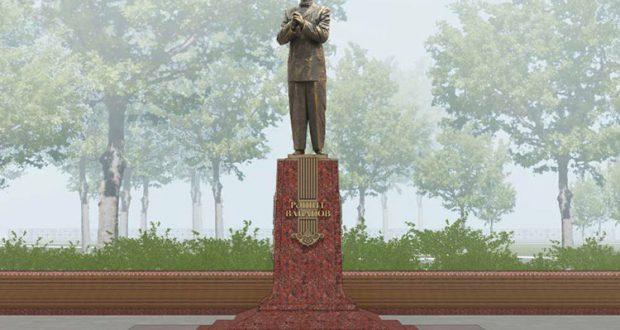 “Vagapov turned out to be middle-aged, the image was a success”: a monument to the father of the Tatar stage will be opened in Kazan

“Vagapov turned out to be middle-aged, the image was a success”: a monument to the father of the Tatar stage will be opened in Kazan

The creator of the “bronze” Rashid Vagapov was the author of the Mustai Karim monument in the capital of the Republic of Tatarstan.

The height of the monument to Rashit Vagapov near the building of the Tatgosphilharmonia, together with the pedestal, will be 5 m, it will become the main new symbol of the local square, which this year will be turned into a garden and beautified the territory. Meanwhile, the history of this monument began a long time ago, Ilgam Shakirov petitioned for the monument to Vagapov, and the first decree on its creation was signed by the Prime Minister of the Republic of Tatarstan Rustam Minnikhanov. Details – in the material “BUSINESS Online”.

This year, the square near the Philharmonic Hall on Pavlyukhin Street in Kazan will be turned into a garden and beautified. And the main new iconic object will be the monument to the Tatar singer Rashit Vagapov Sketch: zakupki.gov.ru

Instead of a Philharmonic parking lot, there is a summer concert zone. How will the square on Pavlyukhin be landscaped?

This year, the square near the Philharmonic Hall on Pavlyukhin Street in Kazan will be turned into a garden and beautified. And the main new iconic object will be the monument to the Tatar singer Rashit Vagapov. For these purposes, 6.8 million rubles will be allocated from the city budget – the tender appeared on the public procurement website the day before. The customer under the contract is the Department of Capital Construction and Reconstruction of the Executive Committee of Kazan. The work should be completed this year, by November 15th. Literally the other day, on July 27, the executive committee adopted a resolution on the upcoming work “in order to perpetuate the memory of the outstanding singer, People’s Artist of the Tatar ASSR R. V. Vagapov.”

The authors of the park improvement project are the head of the creative group at the Kazan City Hall Daria Tolovenkova, as well as a group of architects. They are Ruzal Farkhullin, Ramziya Khairutdinova and Alexander Bakulin. The draft design for the placement of the monument to Vagapov was prepared by the bureau of the famous Kazan architect German Bakulin – his sketch, in collaboration with Moscow and Japanese companies, won the recent international competition for the design of a new theater building. Kamala.

“It is necessary to express the identity of this space, because the Philharmonic Square is a unique place in terms of combining meanings (orchestra, singers, etc.), layering historical events,” the explanatory note to the project says. The place really has its own history. On the site of the square was the estate of the merchant Mikhail Kvasnikov, who was engaged in gardening and grew his exotic plants and flowers in a flower shop. It has survived to this day, is located on the corner of the Black Lake Park. In 1955, on the site of the estate, the House of Culture named after A. Kirov, and already in 2000 the building was transferred to the Tatar Philharmonic.

The territory of the square is limited by Nazarbayev, Pavlyukhin, Spartakovskaya and Shalyapin streets Sketch: zakupki.gov.ru

But the main symbol of the place should be a monument to the singer Rashit Vagapov. It will be installed almost in the center of the square. According to Bakulin, the author of the preliminary design of its location, they developed it back in 2020 based on the park improvement project. The place is suitable for a monument and the construction of such a monument requires renovation of the square. The sculpture will rise on a granite pedestal depicting Vagapov in full growth. The total height of the monument will be 5 meters. Moscow sculptor Andrei Kovalchuk worked on the singer’s sculpture himself  made the image of Vagapov in the form of a singing pose, often used in performance – with folded arms at chest level. There are also folds on the clothes. By age, Vagapov turned out to be middle-aged, not elderly. The image worked. Therefore, we did everything in such a way as to show this sculptural work as advantageously as possible, ”Bakulin told BUSINESS Online. The image of an ordinary singer who folded his hands, according to Bakulin, was approved by the artistic council and the expert community in the Ministry of Culture of the Republic of Tatarstan. “The resemblance is not bad,” he says.

Vagapov’s face will face Pavlyukhin Street, as well as the main facade of the Philharmonic – to the southwest, so that during the day there will be optimal illumination of the pedestal. In addition to the monument itself, an extended monumental bench with floor lamps will also be installed to give significance to the place. And in front of the monument