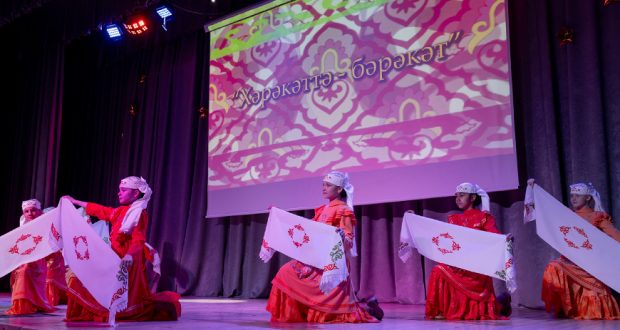 In Kazan, the results of the projects “Khәrәkәttә – bәrәkәt” and “Sөyla” were summed up. The reporting concert took place in gymnasium No. 180 of the Soviet district of the city on May 16. Schoolchildren demonstrated the skills they received during the Tatar dance and word art classes. The students performed folk dances and waltzes, told the works of Tatar writers and poets, and also showed a theatrical performance.

“In May last year, we launched the Khәrәkәttә – bәrәkәt project in the parks and squares of Kazan, and now it has also entered schools. Today we saw the result of only 20 lessons. In the future, it is important to continue the project in the form of a large-scale festival. Probably everyone understood that these projects are necessary,” said Guzel Sagitova, Deputy Head of the Executive Committee of Kazan.

In total, 700 students from 40 schools studied in the projects, 20 classes were held over four months – from February to May. Professional dancers, teachers-choreographers in the Tatar language, theater artists and TV presenters became mentors for schoolchildren. They were presented with letters of thanks from the Executive Committee of Kazan.

“We worked with students to the best of our ability. There were more Russian children in my group, and when explaining the Tatar movements to them, I resorted to translation. They were interested in whether Tatar dance lessons would be held next year as well,” said Algiz Fayzullin, Honored Artist of the Republic of Tatarstan, one of the mentors of the Khәrәkәttә – barektə project.

Zulfiya Valieva, People’s Artist of the Republic of Tatarstan, also spoke about her impressions about the Soyla project. She noted that the lessons were very important for children who never went on stage. “I would like this “landing force” to go to more schools in the future,” Z.Valiyeva noted.

Educational institutions, where the projects were held, were awarded letters of thanks from the Department of Education of the Executive Committee of the city. “We are glad that the Kazan City Hall has organized such projects. Thanks to them, the students learned the basics of art,” said Rakhima Arslanova, director of gymnasium No. 20 of the Sovetsky district.

The projects “Hәrәkәttә – bәrәkәt” and “Soyla” were implemented by the City Hall with the support of the Commission under the President of the Republic of Tatarstan on the preservation and development of the Tatar language.

From May to September, sports and creative classes in the Tatar language will be held in 6 parks of the city as part of the Khәrәkәttә – bәrәkat project, the Department for the Implementation of National Policy in the Field of Language Culture of the Executive Committee of Kazan reports. The first event is scheduled for May 26, it will be held on the embankment of Lake Kaban.