Home / News / A few days ago, a joint screening of the comedy film “Apipa” was held in Belgium 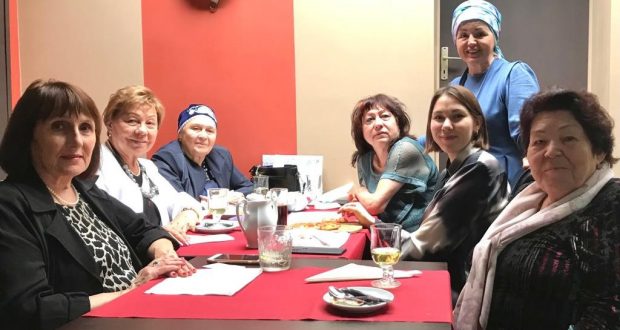 A few days ago, a joint screening of the comedy film “Apipa” was held in Belgium

Compatriots from different cities of the country came to a restaurant, where they were able to watch a new film for them, then stayed for a joint dinner to discuss what they saw and share their emotions.

The Tatarstan people themselves saw the product of the culture institution “atarkino” on big screens exactly a year ago, fell in love with it for its light playful style, unexpected somersaults in the development of seemingly predictable events.

Of course, an attractive moment of the comedy is the fact that the star cast of the Tatar stage starred in it. Producer Milyausha Aituganova, choosing a gift for the 10th anniversary of the Tatars in Belgium public organization among a dozen national films, primarily relied on the fact that compatriots would be familiar with the singers, whose video clips they often see on social networks. And in this film, they are just a luxurious inflorescence. Alsu Abulkhanova, Alina Sharipzyanova, Dilya Nigmatullinana, Lyaysan Makhmutova are frequent guests of European Sabantuyev.

Even before the start of the screening, Zulfiya Valeeva appeared on the screen, who is familiar to many not so much as an actress of the theater. Tinchurin, as much on the vocal trio “ZuLayLya”. The audience immediately received a task from her: “How many roles did I get in this film?” And indeed, in the finale, the correct number was determined: the heroines of Zulfiya, in different roles, took the touring troupe three times in their settlements. For the correct answer, on behalf of Zulfiya Valeyeva, the most attentive viewer was awarded a tourist set about Tatarstan. Alsu Abulkhanova sent a warm greeting in advance, noted that she understands how it is difficult to maintain an interest in culture and traditions away from homeland, but nevertheless, compatriots have a desire, desire, and this is the main thing.

The comedy in the style of the cute “Carnival Night” immediately captured the attention of the audience with its non-trivial situations, omissions, multi-layered loads on short phrases. As the audience later said, there is a lot of sparkling folk humor, speaking facial expressions. The creators of the film with elements of a musical created it in such a way that even those who do not speak the Tatar language fully grasp the plot, empathize with the heroes, and immerse themselves in stellar life for 70 minutes. Of course, subtitles in Russian also helped.

Those who follow the musical and theatrical world of Tatarstan and Bashkortostan immediately noticed familiar faces on the screen. The audience’s favorite, Firdus Tyamaev, plays a simple bus driver in the film, but this is the most humorous role. Right next to Firdus in the film and Alvin Gray with his famous fluffy hairstyle.

Coincidentally, on this very day and at the same time, 4 thousand kilometers away, in the Samara region, the Khudozhestvenny CRC also gathered Tatars for the film Apipa. The actress who played the main role, Reseda Salyakhova, came to the meeting there. After telling the Samarans from the stage about the very process of filming, delicate fragments, anecdotal moments of work, she immediately went on video communication for a dialogue with the Belgian audience.

The compatriots of Belgium remember Reseda Salyakhova herself from a small tour in Brussels, when the actors of the Karim Tinchurin Theater visited with a lyrical performance. Artem Piskunov also came at that moment, who got the main male role in the film “Apipa”. Piskunov plays an impostor accordion player who has penetrated into a musical group.

In their wishes, the Belgian Tatars were unanimous: such films not only brighten up leisure and are a wonderful film for family Sunday screenings, but also work with their reliable methods on the problem of the loss of the ethnic and cultural identity of the Tatars, help to unite the nation.