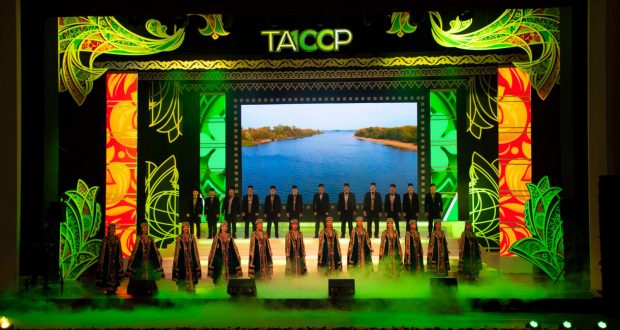 On November 4, 2021, at 14.00 on the site of the Saydash CC, a broadcast of the Gala Concert of the Republican Ethnocultural Festival “Our Home is Tatarstan” will take place.

The live broadcast is carried out on the TNV and TNV-Planet TV channels, on the TNV YouTube channel, in the accounts of the Republic of Tatarstan (https://vk.com/nashtatarstan) and the House of Friendship of Peoples (https://vk.com / domdruzhbytat) on the Vkontakte social network.

The program of the festive online concert dedicated to the Day of National Unity, which will be held at the Saydash Cultural Center, includes the vocal and choreographic performance “Russia! You are the only one! “, Which will be presented to the residents of Tatarstan by Honored Artists of the Republic of Tatarstan Maria Semenova and Roman Plekhanov, the Volga region choir of the I. Krutoy Academy of Popular Music, the Sharm children’s pop choir of the Republic of Tatarstan and the Dmitry Zheleznov boys’ choir.

On this day, creative groups of the State Song and Dance Ensemble of the Republic of Tatarstan, the Kazan Ensemble, the Bermanchek State Kryashen Ensemble, the Bulgary and Tatarstan Dance Ensemble from Naberezhnye Chelny, and the Russian Song Choir will also perform on the stage of the Saydash CC. , ensemble “Vaguda”, dance ensemble “Savalat kupere” and other Laureates of the Republican ethno-cultural festival “Our home is Tatarstan”. “Potpourri of the Peoples of the Caucasus” will be performed by the ensembles “Sakartvello” and “Kavkazstyle”. The concert program also includes performances by honored artists of the Republic of Tatarstan Alina Sharipzhanova, Aydar Suleimanov and the Versia vocal ensemble.

Modern arrangements of folk melodies will be performed by Ilҗgiz Shaikhraziev and Islam Valeev, the Zakariya folk group, the Shanu group, and the New Generation ensemble.

The Republican Ethnocultural Festival “Our Home is Tatarstan” has been held since 2012 with the aim of strengthening the unity and spiritual mutual enrichment of the peoples living on the territory of the Republic of Tatarstan. Since 2014, the gala concert of the Festival has been held on November 4, as part of the Day of National Unity at the Tatar State Academic Opera and Ballet Theater named after I. M. Jalil.

The festival is held on the basis of municipal districts and is turned  into a gala concert in Kazan, being a powerful incentive for the development of amateur creativity. More than 200 creative teams representing the peoples living in the Republic of Tatarstan take part in the municipal tours of the festival every year. Over the entire period of the festival, more than 15 thousand people took part in it.