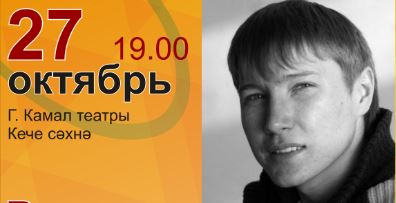 On October 27, at 19.00, on the Small Stage of Kamal Theater. a meeting with the Poet and Person.

The meeting will take place on two levels:

At the point of intersection of these two planes, the mystery of Ruzal Mukhammetshin to be unraveled. But you have to make an attempt, including viewers. The role of ordinary viewer … – in this case just is not possible. 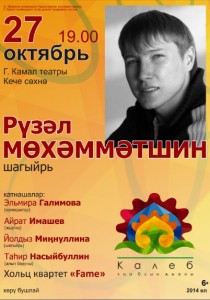 three classes he learned in his native village, and the next seven trained in Russian school at the neighboring village. After graduating from high school, enters the Kazan Humanitarian Pedagogical University. Today he is the editor of the youth magazine “Idel”. Author collections of poems “Chernovik (Draft)”, “The Wolf I am.” The author of the libretto “Ak bүre.” The RT M. Jalil Award laureate. With his wife Milyausha fosters son Idel.

Spectators will be able to:

– Hear the poem in his performance;

– To conduct a conversation with him;

– To get acquainted with his book “The Wolf I am ” and buy it, autographed by the author;

– To be a witness and participant in an organized “hunt” on Ruzal;

– Hear the song on the verses of the poet, the composer’s works by Elmira Galimova especially for this evening (played by the quartet LA PRIMAVERA);

– Listen to the part of Diu from the opera “Ak bүre” performed by singer Ayrat Imashev;

Ruzal Mukhammetshin: Poet. Publicist. Philosopher. Stranger. His creativity raises such questions, answers to which are not all are looking for, makes you wonder, deprives the rest, pulls you out of the ordinary state of drowsiness. He is one of those poets who speak boldly and straightforward. These poets in our time are needed very much. Not only in order to go on and win the public square, but to talk heartbreakingly sincere and from the heart, forcing the listener to shudder. Poetry by Ruzal Mukhammetshin attracts by its directness, rebellious, sometimes manifests teenage maximalism, simplicity, naivety, his struggle with mediocrity. Many see his poetry in the first national public pathos, treating him as a street poet, tribune. And overlook his fine lyrics. At the upcoming evening you will be able to get acquainted with philosophical lyrics, and imbued with a peculiar sense of humor poems.

The meeting will be attended by: