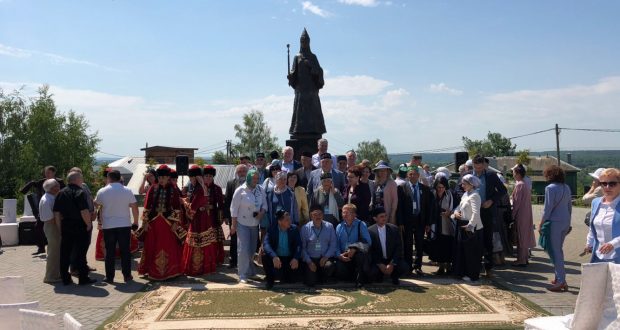 The ceremony was attended by Deputy Prime Minister of the Republic of Tatarstan, Chairman of the National Council of the World Congress of Tatars Vasil Shaykhraziev.

The grand opening began with the reading of the verses of the Koran. Officials addressed the guests of the holiday with a welcoming speech.

Chairman of the National Council of the World Congress of Tatars Vasil Shaykhraziev expressed gratitude to the leadership of the Ryazan region and the city of Kasimov, the chairman of the Spiritual Muslim Board of the Russian Federation, Mufti Sheikh Ravil Khazrat Gainutdin, the Regional National Cultural Autonomy of the Tatars of the Ryazan Region, headed by Ildar Bikuev, residents of the city and everyone involved in today’s celebration.

Since 2010, the restoration of the ancient city of Bulgar began. On May 21 of this year, the 1100th anniversary of the adoption of Islam by the Volga Bulgaria was celebrated there. And today it is a single history of great Russia. We love our history, we value it today. And the opening of the Syuyumbike monument is an example of this. We are grateful to everyone who contributed to this good cause. Many thanks to the residents of the city of Kasimov, who from the first supported this project, – said Vasil Shaykhraziev.

After the speeches of officials, the most long-awaited moment came – the monument was presented to the guests. The monument to the Kazan queen Syuyumbika is a sculpture three meters high and weighing 1.5 tons, cast in bronze in St. Petersburg workshops.

The grand opening was graced with performances by the masters of arts of the Republic of Tatarstan and the city of Kasimov: Saida Mukhametzyanova, Alina Sharipzhanova, the Kazan Nury Orchestra of the Kazan City Philharmonic Society, the Ailanai State Nogai Folklore-Ethnographic Ensemble of the Republic of Dagestan, and others.

After the official part, the solemn event continued with a Friday prayer at the Khan’s mosque.