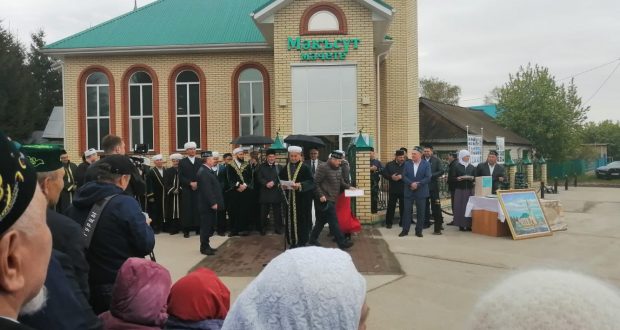 A new mosque in the village of Nizhniye Yaki, Mamadyshsky district   opened

Today, on the 26th day of the month of Shawwal (May 27), Mufti of Tatarstan Kamil Khazrat Samigullin is on a working visit to the Mamadysh region. A long-awaited event in the life of the Muslims of the region took place here: the Maksut mosque was solemnly opened in the village of Nizhniye Yaki. The joyful event gathered numerous guests around it, including imams, imam-mukhtasibs of the Rybno-Slobodsky, Kukmorsky, Yelabuga, Mendeleevsky, Aktanyshsky districts, respected sponsors, and residents of nearby villages.

The new mosque was built next to the mosque in 1996. Construction began in the summer of 2017 with the approval of the head of the district, Anatoly Ivanov, and was carried out through the efforts of a native of this village, Rifat Maksutovich Makhmutov, who now works as the head of the Mamadyshsky grain collection point. By the decision of the villagers, the mosque was named after his father. The mosque opened its doors this spring. During the month of Ramadan, taraweeh prayers and iftars were held here.

The mosque with all conveniences was built of brick with the use of aerated concrete blocks. On the balcony, especially for women, there is a place for reading prayers, in the basement there are rooms for washing for men and women, a reading room, a room for holding Majlis, a library. The mosque is designed for 250 people. Nearby there is a children’s and sports ground.

Numerous guests took part in the opening ceremony of the Maksut Mosque: Mufti Kamil hazrat Samigullin, Deputy Chairman of the State Council of the Republic of Tatarstan Marat Akhmetov, head of the Kazan branch of the World Congress of Tatars Farid Miftakhov, head of the Mamadysh district administration Anatoly Ivanov, Kazy of the north-eastern region of Tatarstan Ruslan hazrat Murtazin , imam-muhtasib of the Mamadysh region Ilham hazrat Minnegaliev, imams of the village.

Today there are 61 mosques in the Mamadysh mukhtasibat. Mosques are currently under construction in the villages of Sotovo, Zelenaya Gora, Sredniy Shander, it is planned to move the wooden mosque of the village of Nizhniye Yaki to the village of Suelga.