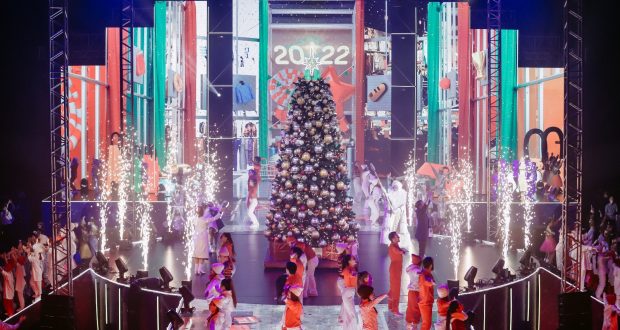 More than eight thousand children from all over Tatarstan were gathered by the traditional Republican New Year tree. The event took place twice in the Basket-Hall in compliance with all sanitary and epidemiological measures. The performance could also be viewed online. And also, everyone could take part in the action by uploading a New Year’s family photo in advance, and today they were shown on the main screen during the performance.

The participants have benn  greeted by the President of the Republic of Tatarstan Rustam Minnikhanov.

He noticed that all the guys are united by work and perseverance, the desire for victory and indifference. “With special pride I want to thank the young heroes who are in this hall today. There is nothing more important than saving and preserving life! I sincerely thank those who help those in need and actively participate in charity events. You do a lot for our veterans, ”the President of the Republic of Tatarstan emphasized.

The participants were children who showed themselves in studies, sports competitions, creative and social life, as well as unprotected categories of children.

“Every year the guys come in anticipation of a miracle and our task is to meet their expectations. The plot of the performance is connected with information technology, and the children themselves could actually directly participate in the musical – by going through the QR code, light up the lights of the New Year tree or vote for their favorite sports team. Another feature of this year is the ability to watch the performance online, which allowed even more children to plunge into this New Year’s atmosphere. There are many innovations, but family values ​​remain unchanged, which underlie each New Year’s performance, “- summed up the Minister of Youth Affairs of the Republic of Tatarstan Timur Suleimanov.

“The performance ended with the display of photographs of the families of Tatarstan – with this action we emphasized that no virtual world would allow to love like the real one. This could be seen at the moment of the musical sequence of the smallest hero – the dogs, the guys at that moment lit their lanterns, although there was no command, and thus supported him. This reflected the main message as accurately as possible – the real world will never replace the virtual one, family values ​​will always be a priority, ”said Deputy Prime Minister of the Republic of Tatarstan Leyla Fazleeva.

We remind you that the tradition of celebrating the New Year by gathering children from different regions of Tatarstan at one playground was established in 2000. At the end of the festive program, each spectator received a sweet New Year’s gift in the form of the main symbol of the year – a tiger. Some of the gifts, together with social services, will later be delivered to children who, due to health reasons, could not take part in full-time, as well as children in difficult life situations.