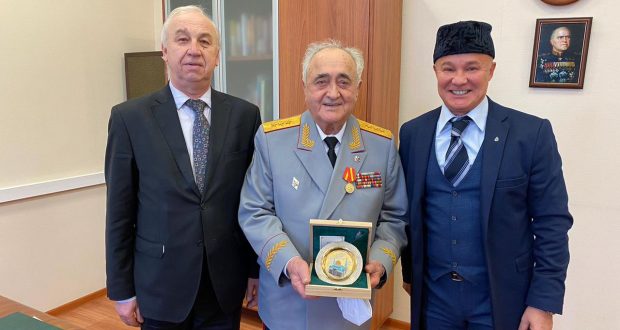 Head of the Tatar Autonomy of Moscow, Deputy Chairman of the Council of Muftis of Russia Farit Farisov and director of the Tatar Cultural Center Anver Khusainov congratulated Colonel-General Rasim Suleymanovich Akchurin on his birthday.

He is one of those who stand at the origins of the revival of the cultural and social life of the Tatar community of the capital. For many years he headed the Regional Tatar National-Cultural Autonomy of Moscow and still continues to engage in public work.

It was under the leadership of Rasim Suleimanovich that the historical building in Maly Tatarsky Lane was returned to the Tatars of Moscow, and Sabantuy in the capital acquired the official status of a citywide holiday.

He celebrated his 90th birthday at his workplace in the Moscow City Council of Veterans.
Statesmen and generals came to congratulate the outstanding son of the Tatar people. Today in R.S. Akchurin sounded congratulations, music and a whole chorus of children’s voices.

On behalf of the Chairman of the Spiritual Administration of Muslims of the Russian Federation and the SMR, Mufti Sheikh Ravil Gainutdin, Farit Farisov presented Rasim Suleimanovich with a congratulatory address and a memorable souvenir with the image of the Moscow Cathedral. The text signed by the mufti, in particular, says: “You are one of the symbols and golden pillars of the Tatar community of the Russian capital, a venerable aksakal, devoted to his people and our Fatherland. Many good undertakings of the Tatar national-cultural autonomy of Moscow and the Tatar community of the capital in general are associated with your name. For the younger generation, you are an example of faithful service to the state interests, high professionalism and patriotism. ”

The autonomy of the Tatars of Moscow joins in congratulating the distinguished guests and friends of Rasim Suleimanovich.
United, indivisible, invincible!