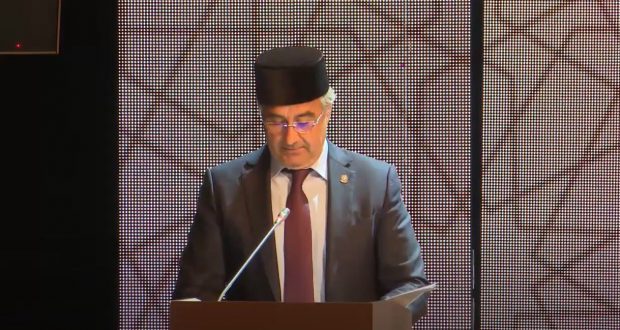 From May 19 to May 21, Kazan hosts the All-Russian gathering of Tatar religious figures. Today, the Tatar Opera and Ballet Theater named after Musa Jalil has become the venue for the plenary session of the forum, in which the President of the Republic of Tatarstan Rustam Minnikhanov takes part.

The delegates of the meeting and guests of honor were welcomed by  Deputy Prime Minister of the Republic of Tatarstan, Chairman of the National Council of the World Congress of Tatars Vasil Shaykhraziev.

-Today’s events are attended by 1,100 religious figures from 76 regions of Russia and 5 foreign countries. The largest delegation arrived from the Republic of Bashkortostan. Representatives of the Republic of Belarus, Kazakhstan, Kyrgyzstan, Donetsk and Luhansk People’s Republics, delegations from the Caucasus and Crimea are also present here, – said the Chairman of the National Council.

In his speech, Vasil Shaikhraziev briefly introduced the participants of the event to the history of the adoption of Islam by our ancestors and the impact of this historic step on the further development of the people.

– Today, Islam is a reliable foundation that leads everyday life in Russia along the path of well-being. And the holding of large-scale celebrations dedicated to the 1100th anniversary of the adoption of Islam by the Volga Bulgaria by the decision of the President of the Russian Federation Vladimir Vladimirovich Putin proves this once again, – Vasil Shaykhraziev emphasized.